With Remembrance Day having just passed and with this year marking 100 years since the start of the First World War, it seemed fitting to take a look at the aviation side of the conflict:

The Shuttleworth Collection’s Sopwith Pup, Sits outside the museum entrance on the 11th November 2014.

When war broke out in 1914, it was only 11 years on from the Wright Brother’s historic first flight, aviation was very much still in its infancy. It was this fact that led to aircraft being low on the priorities list when the conflict started. When aircraft were slowly introduced they were merely used in an observation role.

In the early days of the war, the Royal Flying Corp had few aircraft. One of which would have been the Avro 504. Being a pre-war design, the 504 was quickly overtaken by later aircraft and was withdrawn to a training role, though it was used in some fighter and even light bombing roles throughout the war. An 80hp Rotary style engine powered the 504, a design that was used on a number of 14-18 types.

Avro 504 at the Shuttleworth Collection.

The rotary design had the propeller hub bolted to the engine, with the actual engine spinning around. These engines were commonplace in a number of the early fighters; they had very rudimentary power changes, often only having the option to “blip” on and off to control airspeed, later advances in engine design led to finer power adjustments.

A front view of the Avro 504, showing the 80hp Gnome Rotary engine.

It is still possible to see an Avro 504 flying even 100 years on from its first flight. The Shuttleworth Collection is home to a 1918 model, which was used as a trainer in-between the wars as well a glider tower during the second world war. Like its stablemates in the collection it allows visitors to take in the unique sight, sound, and even smell that a rotary engine provides.

The first aeroplane to really become usable during the war was the Be2, one of Geoffrey de Havilland’s first designs.

Like the 504 this aircraft was a pre-war design, though it went through many models and changes. The Be2 was one of the first aircraft to be stable in all directions, meaning it could be flown hands off, allowing the pilot to focus on other tasks, such as observation. It was this improvement in aircraft handling that led to the types deployment out to the front lines.

This first deployment took place on the 13th August 1914, when twelve Be2s from No.2 squadron flew across the channel to Amiens in support of the British expeditionary force. This was a feat in itself as it was only 4 years on from Louis Bleriot’s first channel crossing. The first aircraft to arrive, dubbed “First in France” wore the tail code 371, flown by Hubert Harvey Kelly. 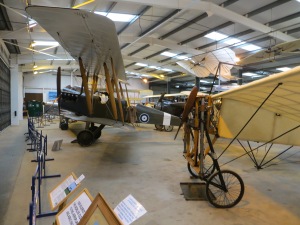 4 Years apart: The Bleriot (foreground) an aircraft which first flew the Channel in 1909 and a Be2, the first type to be deployed to France in 1914.

Fast-forward almost 100 years to a very blustery 12th of August in Kent; I was waiting at Headcorn airfield, hoping to witness the arrival of three Be2s. This was the impressive attempt to recreate the first deployment, it had already been pushed back a day due to very high winds.

I’ll admit I didn’t hold out much hope for the aircraft arriving as the winds were still up at around 25mph. Arriving a few minutes late, no doubt due to the head wind was the “Biggles Bi-plane” a metal framed replica early Be2, based at Sywell, which wore the same scheme as the “first in France” wore. Having circled in the overhead the Be2 came in for what looked like a difficult landing and was soon covered with journalists getting their scoop about the event.

The Sywell based Be2 replica landing at Headcorn.

Winds prevented the two Old Warden based Be2s from even leaving Shuttleworth, with such a basic construction and their wooden frames the aircraft are especially venerable to gusty conditions. The winds also halted any further progress that the Sywell based machine might make. The crew elected to stay the night at Headcorn and an RAF Tornado later performed a few passes over the aircraft.

The next day, the actual anniversary, the Be2 went for a short flight out to overfly Dover as winds were still too strong to get to France in decent time. It was wonderful to see the aircraft flying from Headcorn on such a historic day and was a commendable attempt.

The “Biggles Bi-plane” preparing to leave Headcorn on the 13th August 2014.

Incidentally it has been wonderful to see the two Be2s which came over from New Zealand this year, they look just as if they have come off the production line and are displayed so gracefully. It’s fascinating to see such early war aircraft being flown in this country.

An original Be2c at Duxford.

One of the pair of Be2s that were brought over from New Zealand this year.

During 1914 some very basic bombing missions were attempted, though at this stage the methods were still very rudimentary, with the only really missions being carried out by Zeppelin air ships over the Thames estuary and London.

In terms of air combat, observation pilots quickly started to tire of simply waving at their enemies in neighboring aircraft and this soon progressed to taking pot shots at each other with pistols or even throwing grenades!

The first aircraft brought down was an Austrian machine, rammed by a Russian aircraft, on the 8th September 1914. Both aircraft were destroyed. The first instance of a Machine gun being used to fire at another aircraft was on the 5th October 1914, when a French pilot shot at a German machine. With this event air combat was created.

Early pusher aircraft such as the DH2 and Royal Aircraft Factory Fe.2.B were the first solution to fitting a machine gun thought up by the British, by having the propeller behind the aircraft, the risk of shooting off your own propeller was removed. However, most of these aircraft were underpowered as a result, except the FE2B, which remained a potent machine right through until 1917.

A Period photo of the “Pusher” DH2.

As development moved on, the need for a machine gun on smaller “scout” aircraft, as fighters were called in their early years, with the propeller up front grew greater and greater. Eventually the interrupter gear was thought up towards the end of 1914, which only let the machine gun fire when the blades were not in harms way. The German Fokker E1 monoplane became the first successful aircraft to utilise the system in 1915; this was eventually developed into the more reliable British hydraulic system in 1917.

A Fokker E1. One of the first aircraft to feature an interrupter gear.

On this late war Se5a, a machine gun can be seen aimed through the propellor arc. This was made possible and safe thanks to the development of the interrupter gear.

By 1916, the Be2s, which some British squadrons were still using, were no more than target practice for the more advanced German machines introduced during that year.

One of the most famous of these advanced German machines was the Albatros D.1, which would lead on to a highly successful series of fighters for the Germans. This first model was fitted with a 150 or 160hp engine, which provided it with an impressive performance for the time. This increased power gave the Albatros a top speed of 109mph, compared to the be2s 72!

The first examples were delivered for squadron service in August 1916. What the aircraft lacked in maneuverability it made up for with speed and firepower. The Albatros line developed throughout the war, with the D.V being the final example to see active service in the war, being introduced in 1917.

A number of replica examples can be seen flying around the world, notably at The Vintage Aviator Collection in New Zealand as well as Old Rhinebeck and Fantasy of Flight in America.

An Albatros D.III, a later example of the fighter.

By the end of 1916, with the introduction of the Albatros, amongst other new fighters, Germany had well-established air superiority. But Britain had plans in the pipeline that would soon change everything.

This concludes the first part of this series, next week will take a look at the development of aircraft during the final two years of the war, which brought about refined designs that gave Britain the edge in the air.

Many of the aircraft featured in this article can be found at the Shuttleworth Collection, take a look at their brand new website for more information: 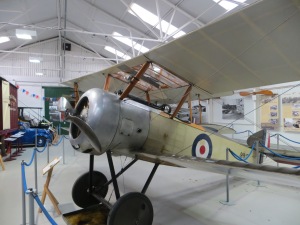 Aircraft such as the Sopwith Pup would soon turn Britain’s fortunes around.