In the first part of this Headcorn post, I gave a brief history of the airfield and posted a few photos of some interesting visitors that have dropped in over the years. Today I wanted to give a bit more detail to these visits and some of the recurring warbirds that have formed part of the airfields history for many. 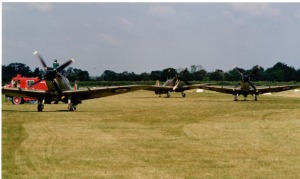 3 Spitfires taxy back in after filming for Piece Of Cake.

While a little before my time, in 1988, the biggest warbird event to have happened to Headcorn was likely the filming of the TV Series “Piece of Cake.” (Highly recommended by the way!) Filming at a grass strip near Dover, the film aircraft needed hangars overnight, so used Headcorn as a base.

A number of Spitfires and 2 Hispano Buchons were on the airfield for a week. My dad has told me stories of the mass departures and airfield beat ups on return from filming. As well as the fighters, a Harvard and JU52 made appearances on the airfield.

A Buchon kicking up dust during the filming of Piece Of Cake.

Throughout the early 90s there were occasional appearances from Fighter Collection aircraft coming through the airfield, conducting practice displays, such as the P-47 thunderbolt, as well as the P-51 Miss L occasionally visiting.

But it was Rob Davies’ purchase of P-51D Mustang “Big Beautiful Doll” that brought about the iconic “Headcorn Warbird.” I remember as a child often going down to the airfield of a Sunday and seeing the Mustang sitting out on the line, as well as watching countless flypasts Rob performed to and from airshows.

He was later joined by Maurice Hammond’s P-51 Janie, and later on Marinell, which also visited the airfield regularly, providing a hint of the airfields wartime heritage. 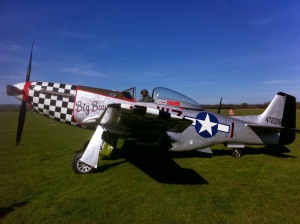 Big Beautiful Doll preparing to depart Headcorn for the last time before moving to Germany.

Sadly in 2011 Rob sold his Mustang, as luck would have it I decided to head down the airfield on a whim one day in April of that year, and found the Mustang sitting out on the field once again, as it turned out this was the last visit to Headcorn before departing for Germany.

As many of you probably know, Big Beautiful Doll was sadly lost at the Flying Legends show of that year, Rob managed to get out of the aircraft and parachute to safety at low level, and is still often seen at Headcorn in his Stearman, Yak 11 or one of Maurice Hammond’s Mustangs.

Back in the late 90s there were also regular visits from a Spitfire MKXI, flown by Martin Sargeant, often providing a line up of Mustang and Spitfire out on the airfield. Tragically both the Spitfire and Martin were lost in 2001 at an airshow in France.

Since the departure of Big Beautiful Doll, warbird appearances at the airfield started being a little rarer, with occasional visits from Maurice Hammond being the only real appearances. 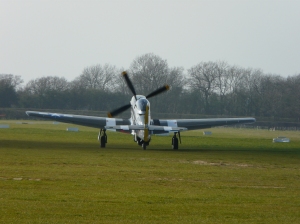 While the unplanned movements happened a little less in the past few years the Headcorn based events have been getting better and better each year. The first few events the airfield held were Flying Proms evenings, which brought in a number of interesting aeroplanes including a Spitfire and Hurricane.

Guy Black’s Spitfire and Hurricane at one of the Headcorn Flying Proms.

But it was the second event to be trialed on the airfield that has really taken off. The “Combined Ops” weekends have grown larger and larger each year and with it so has the air display content.

This show has brought a number of impressive visitors to the airfield, I can recall seeing the f-86 sabre, Hunter “Miss Demeanour”, Norwegian Vampire and Gnat display team all at Headcorn for this event. It is highly unlikely these jets would have been seen at the airfield without this event.

Combined Op’s crown jewel display has to have been this years 2 Lancaster performance, sadly limited to one day due to adverse weather but impressive none-the-less. Seeing both Lancaster’s at a small airfield such as Headcorn was a surreal and emotional sight.

The Lancaster pair at Headcorn earlier this year.

Luckily over the past few years the Battle Of Britain Memorial Flight have been kind enough to supply the airfield with Flypasts when they have been in the area. Another semi-regular visitor is Peter Teichman in his Hangar 11 fleet, at one time or another each of the Hurricane, Spitfire, Mustang and P-40 have visited the airfield.

Odd one out: Peter Teichman’s Spitfire Mk XI at Headcorn earlier this year.

But again this was all fairly irregular, in many ways making it more of an event each time a visitor came in. But 2014 brought about some special news for warbird lovers at the airfield. In late June a press day was held for a new company operating out of the airfield – Aero Legends. This brought a Harvard, Spitfire T9, Spitfire Mk9 and a Hispano Buchon to the airfield. 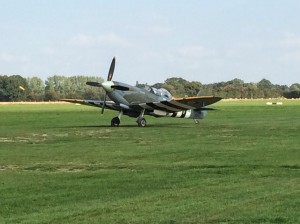 Aero Legends were there to announce a new opportunity to fly in the Spitfire, with flights commencing later in the year. An eventful afternoons flying followed, with all 3 fighters going up for a press display segment.

The arrival of Aero Legends marks the start of a new era for Headcorn, with regular appearances of the Harvard and T9 Spitfire giving flights. The airfield, it seems, isn’t ready to give up its warbird obsession either.

One thought on “Headcorn Airfield – A Warbird History Part 2:”