Every now and again a small and relatively unknown aircraft can be chosen for an extraordinary role and as such become something of a legend all of itself. Thats certainly the case with today’s subject: 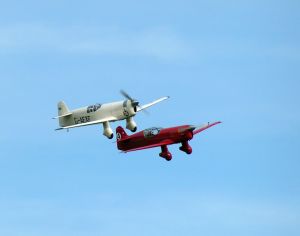 The two Mew Gulls during their display at Old Warden in October.

Following on from their success with the 1932 Gull, Percival wanted to make further advances into the air racing arena. With this in mind the new Mew Gull was designed in 1934. This aircraft was much smaller than the Gull, with fixed undercarriage and a small frame the aircraft looked every part a racer.

Much like other racers of the era, very few were built, in this case only six, all of which were built in Gravesend in Kent. Percival’s main goal was to be a contender and win the Kings Cup air race, which at the time was a real claim to fame for an aeroplane builder.

The type first flew in March 1934 and was entered into the Kings Cup race in July of that year. However on this first attempt the aircraft failed to place. Following an accident the aircraft was redesigned and re-entered. After success slowly built up over the years the Mew Gull finally won the Kings Cup Race in 1937 with G-AEKL piloted by Charles Gardener.

Of course the most famous example of the six Mew Gulls produced is G-AEXF, famous for being used by Alex Henshaw in his Record Breaking flight from the UK to South Africa and back.

Though the Mew Gull always looked a racer ‘EXF received quite a few modifications for the record attempt, these included added fuel tanks as well as a much tighter canopy frame and restricted views. With these modifications however XEF went on to win the Kings Cup Race in 1938 with an average speed of 236mph. 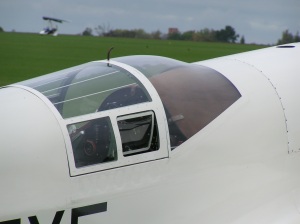 A Close look at the tight confines of the modified canopy of G-AEXF.

Henshaw’s record attempt started on the 5th February 1939 completing the flight to Cape Town and back in just 39 hours. The aircraft was then sold on to French owners and hidden from German authorities throughout the war years. A full account of Henshaw’s epic trip can be found in his book “Flight of the Mew Gull”.

‘XEF had a very mixed flying career following the war years, having a number of owners as well as a number of accidents across the years. It was flown by a long list of now famous display pilots during its years with the Tiger Club at Redhill. In recent years the aircraft was found at the Real Aeroplane Company up at Breighton in Yorkshire. 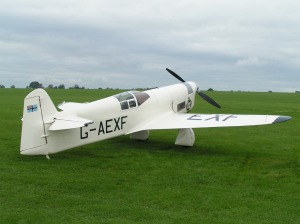 In 2003 the company shipped the Gull over to the Reno Air Races for some mock air races, this was the first Mew Gull to visit America.

Over the years I can recall seeing the Mew Gull performing at a number of shows, a couple that stick in my memory are Flying Legends in 2002, when the Gull flew together with two Spitfires, another aircraft which Alex Henshaw was synonymous with, along with Sywell in 2004, when i remember being able to get an up-close look at the aircraft.

After 10 years at Breighton the aircraft returned to another one of its past homes, Old Warden, where it joins the Shuttleworth Collection along with many of its air racing contemporaries.

2014 saw the first flight of a replica Mew Gull, carrying the registration G-HEKL, as a tribute to the Kings Cup winning G-AEKL. This replica is of astounding quality, representing an unmodified Mew Gull with the slightly larger canopy.

I was able to get a close up look of this astounding project at the Goodwood Revival where the Gull was on static. The aircraft is based at Fenland and can often be seen at Fly-ins around the country.

The Mew Gull and Comet in the Hangar at Old Warden.

2014 really has been a year for classic air racers, with the DH88 Comet returning to our skies as well. But one of the undoubted highlights was the sight of both Mew Gulls displaying at the Shuttleworth’s race day airshow in October.

Both aircraft performed a pairs display before each having their moment to shine on their own. Both of the Gulls certainly showed their speed and pedigree, with the replica aircraft in particular roaring away as it shot across the Bedfordshire skies.

This display was made even more special with the addition of the DH88 and Vans RV7, the latter of which broke Henshaw’s Cape run record in 2010. An impressive line up of racing aircraft both past and present. Hopefully both Mew Gulls will be seen together again in the next couple of seasons.

2 thoughts on “A Pair of Percivals”