Following on from last weeks look at East Kirkby, it is the case of a short drive down the road to RAF Coningsby, which is home to the world famous Battle Of Britain Memorial Flight. I hadn’t visited the flight in some time so was keen to take a hangar tour, winter makes for an especially interesting experience as all the aircraft are deep in winter Maintenance. 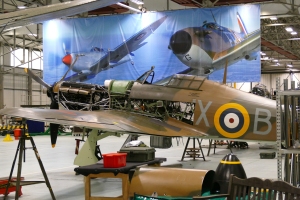 Though not a  museum as such, there is a visitors centre, shop and cafe and throughout the day it is possible to purchase a ticket for a guided tour around the hangar. This is a great way of letting the public see the aircraft while still keeping inline with RAF regulations. The other advantage of having a tour guide, in this case all to ourselves, is that you learn a lot of things you otherwise may have missed.

Close up look at the flight’s Dakota.

A wider look at the Douglas Dakota.

As you walk into the hangar the flights Dakota greets you, always great to see these old transport aircraft up close and kept in such good condition. On the wall behind us was an array of machine guns and cannons outlining the various weaponry used by allied and axis forces at the start of World War 2.

An example of the machine guns and cannons used by the RAF and the Luftwaffe at the outbreak of World War 2.

From this point on it was of course all about the fighters, with both the flights Hurricanes and four of the Spitfires on show it was an impressive line up. Each of the fighters were in differing stages of maintenance, as can be seen from the photographs.

This post is more of a general overview of the flight, detailed histories of the fighters can be found in here, for the Hurricane and here, for the early Spitfires, further Spitfire posts will be added soon, along with the history of the flights larger aircraft.

Another view of Hurricane LF363.

Close up look at just one of the countless Merlin engines housed in this hangar. 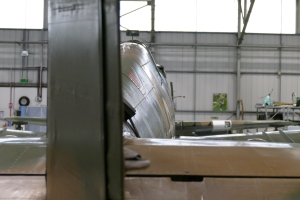 A view down the fuselage of the flights MkII Spitfire, P7350, with the flights second Hurricane visible in the background.

MK.XVI TE311 was one of the more complete aircraft on display.

At the far end is arguably the jewel of the collection and certainly one of the star aircraft of the 2014 airshow season, Lancaster PA474. On display this visit with all props removed as well as the canopy, it was fascinating to see a Lancaster in such deep maintenance, a rare sight indeed.

The tail turret, where so many brave tail gunners would have sat on long missions out over Germany. 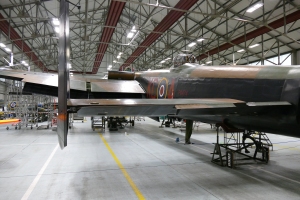 The Lancaster’s imposing size becomes much more apparent when viewed on the ground.

It was a fascinating hour or two spent looking and learning about these historic aircraft. The Battle Of Britain Memorial Flight are of course renowned for displaying at numerous venues across the country which is fantastic, but it does mean chances to see their aircraft close up and on the ground is a rare opportunity.

The hangar tour allows a chance to see the aircraft in a way that isn’t possible when watching them display. I would even argue that winter is perhaps just as exciting a time to visit as during the summer when the aircraft are flying, as seeing them in dismantled states is a fascinating and rare privilege.

….and then theres the added bonus of the modern RAF operations on base.

Another bonus of the flights home base is that after you’re done with your hangar tour, you can drive up to the end of the runway and watch the local Typhoons going about their business, a fantastic day out for any aviation enthusiast.

Details of opening times and hangar tours can be found at the website below:

More photographs can be found on the Warbird Tails Facebook page here: