Keeping in with previous first flight anniversary posts, this week takes a look at the Lockheed P-38 Lightning, which first flew on the 27th January 1939.

At first glance its hard to believe that this design, from the legendary hands of Lockheed’s Kelly Johnson, is now 76 years old. The P-38 is one of the most futuristic looking designs to come out of the war, with its central fuselage pod and twin tail boom design.

At the time of commision, specifications demanded were a maximum airspeed of at least 360MPH and capable of climbing to 20,000 feet in six minutes. Considering the engines and technology available at the time, this was a big ask.

The design that eventually appeared had all the hallmarks of being an impressive fighting machine. Trycycle undercarriage, providing better ground handling, twin engines, contra rotating, for increased range, stability and performance, and a nose full of guns, the P-38 certainly seemed a machine ready for war.

On the 27th January 1939 Leitenant Benjamin Kelsey began flight testing on the new design, then known as the XP-38. After some inital problems with brakes and flaps were ironed out impressive performance figures were attained. The prototype achieved a max speed of 413MPH at 20,000 feet and that altitude was achieved in 6.5 minutes, not bad for an early attempt.

Soon after the test flights, a record attempt flight across the United States took place, with the P-38 flying from California to New York in a time of seven hours and two minutes on the 11th February 1939, though sadly the airframe was lost just short of the runway in New York due to carburettor icing. 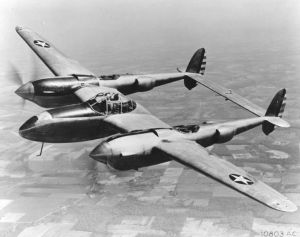 The new design wasn’t without its problems however, there was a vibration problem in high speed dives, in one instance this claimed the life of test pilot Ralph Verden when the tail booms came off his YP-38 during a dive. These high speed vibrations became a feature of the P-38 throughout its career, but was eventually solved in later models.

What is interesting though is that in September 1939 a year before the YP-38 was even completed the US Army had placed an order for 66 P-38s, clearly alot of faith was placed in the design from the start.

Of course being a twin engined long range fighter, the Lightning was well suited to operations in the Pacific theatre and its sucess and stories from the Pacific are well told.

However the P-38 did have a presence in the European war:

The first P-38s to fly in European skies were three “Lightning I’s”, this was the RAF’s designation for the aircraft, the RAF version features Alison engines without superchargers. However this lower spec engine led to very poor performance, so poor in fact that the RAF refused all future deliveries beyond those three aircraft.

The 1st and 14th fighter groups were despatched to Europe. Two squadrons of P-38s were kept back in Iceland to patrol the Atlantic. On August 14th 1942, A P-38 shot down a FW200 Condor shared with a P-40C, this marked the first German aircraft shot down by the USAAF.

After a very quiet period where the Lightnings saw very little enemy content, they were moved down to North Africa to fight in the Mediterranean. This proved an initally succesful venture, on one mission on the 19th November 1942 P-38’s shot down 31 aircraft, with only Six Lightnings lost. This period of air superiority led to the Germans giving the Lighting the nick-name of “Fork Tailed Devil.” However latterly the P-38 did not fair so well, as Axis tactics brought the fighting down below 15,000ft where the aircraft was not so suited. While in general it was a successful theatre for the P-38, it also brought about their heaviest loss, when 13 P-38s were shot down by 109s without claiming a single victory on the 25th August 1943.

Famous German ace, Adolf Galland was unimpressed by the P-38 commenting that it had similar shortcomings to the German ME110, claiming that German fighters were far superior.

Back in England, it soon became apparent as the Daylight bombing raids began that a long range fighter escort would be required. As such the  55th Fighter Group P-38H’s were transferred over to the Eighth Air Force in England and joined Spitfires on early B-17 bombing raids, beginning operations in October 1943. After converting over to the longer range P-38J they were able to conduct their first 1300 mile round trip to Berlin on the 3rd March 1944.

The P-38 played a couple of key roles in the D-Day invasion as well, being used by Jimmy Dolittle to inspect the operation from the air being one of them. Dolittle chose the aircraft as it has such a distinve shape it was unlikley to be mistaken for a German aircraft, reduicing the likleyhood of freindly fire.

The other role they performed was that of a fighter bomber carrying out dive-bombing missions over mainland Europe. P-38s were kept in this role until Feburary 1945 when the role was handed over to P-51s.

P-51s took over from the Lighnings in other areas as well, notably the role of Long range escort, which they took on in September 1944. This was following an evaulation of the P-38 at Farnborough in which it was found the P-38s fighting speed was so low it would only be of use as a reccanasaince aircraft.

As can be seen, despite initial success the Lightning had something of a difficult time in Europe, this was due to a number of factors; The allied hadn’t yet claimed air superiorty at the time and as such P-38s were generally out numbered and suffered from poor tactics. Though over time, it became apparent that the higher top speed and climb performance could be used to the Lightnings advantage and more success was seen.

There were also performance issues in the Variants used by the Eighth Air Force. The Alison engines perfomed poorly at the high altitude the escort missions took place, with a number of engine failures and, due to a lack of compressibility flaps, the aircraft became very unstable in a high speed dive, meaning German fighters could easilt evade it.

With the advent of the P-38J in Europe however things started to change, many of the issues that had previously plagued the lightning were fixed, however by this point in Mid 1944, the P-51 and P-47 had reached a range and performance where they became the favoured mount for escort missions.

The National Air and Space Museum’s P-38J on display at the Udvar-Hazy Center.

As the P-38 was phased out by the Eighth Air Force, the Ninth kept a few Squadrons on. By the time VE day came around only the 474th Fighter Group still had P-38s.

One in eight of all P-38s were either built as a Photo Reconnaissance model, or were modified in the field. The PR Models, designated F-4/5 were used extensively in north Africa, providing much needed intelligence. The P-38s did see high loss rates in this role, as the aircraft was unarmed and un-escorted, but it was still seen as incredibly useful. It was in this role that the Lightning spent most of its time in Europe following the arrival of the P-51D.

By contrast, in the Pacific the Lightning was a much stronger machine where its long-range made it the essential fighter for most missions, making over 100 aces. The engines perfomed better in the Pacific to, owing to better american fuel supplies.

One of the challenges faced of course in the Pacific theatre was that of the Mitsubishi Zero, regarded as one of the most nimble aircraft of the war. Initially the P-38 was no match for the Japenese fighter, especially at low altitude, with special tactics having to be employed to gain success. However, much like in Europe the advent of the J model changed this, with the Lightning able to put in a decent fight against the Zero even at low altitude.

The P-38, to an extent performed an excellent stop gap role until the P-51 and P-47 were developed into the excellent fighting machines they were to become.

One final “last laugh” for the P-38 was that it became the first American aircraft to land in Japan after the Surrender of August 1945. On the 25th August a pair of Lightnings, led by Colonel Clay Tice landed claiming engine difficulties, whether or not this was the case is not known. It does however provide a rather fitting end for the pre-war design that had done so much for the Americans cause over the years.

These days there are still a number of P-38s left in flying condition. With all but one based in the United States.

Of the many Lightnings based in America, the most famous is arguably P-38F “Glacier Girl”. “Glacier Girl” or 41-7630, was on of six P-38F’s escorting two B-17s across the Atlantic on the 15th July 1942. Bad weather led to the flight having to turn around and, eventually belly land in Greenland. The crews were picked up within days and the aircraft were left there. That was, until 1992 when Roy Scoffner acquired salvage rights and managed to recover ‘630. What followed was a long ten-year restoration, finally flying again on the 26th October 2002.

In 2007 an attempt was made to finally complete “Glacier Girl’s” initial journey, accompanied by Ed Shipley in The Fighter Collection’s new TF-51D “Miss Velma”, Steve Hinton was due to fly the P-38 across the Atlantic for that years Flying Legends airshow. Clearly however, she had no intention of completing the flight, developing engine problems at Goose Bay just before the first ocean leg. Ed shipley completed the flight in the P-51, it was a shame that the P-38 couldn’t have joined them.

In Europe we have one example, based with the Flying Bulls in Austria. The aircraft, which carries a “bling” finish all polished metal. The Flying Bulls P-38L used to be the famous racing mount of american Lefty Gardner, who displayed her as White Lightning. Now with the Bulls collection she flies countless displays all across Europe, often visiting the UK for shows such as Duxford’s Flying Legends.

The Fighter Collection did operate a P-38 out of Duxford between 1994 and 1996, which was displayed as “Happy Jacks Go Buggy” and “California Cutie” during its time on display. Tragically the aircraft was destroyed at an airshow in 1996, claiming the life of then chief pilot Hoof Proudfoot. A huge loss to the airshow scene.

More recently the UK has welcomed a P-38 restoration project imported from Australia, recently delivered to Bentwaters for long term restoration. Hopefully in the not too distant future the UK will once again hear that distinctive twin engined Alison sound and see that unique silhouette once again.

A mixed history then, but clearly an important part of air warfare development. It is always the mark of a versatile aircraft when it can be used for a number of roles across an entire 5 year conflict, for that I think the p-38 certainly deserves recognition.