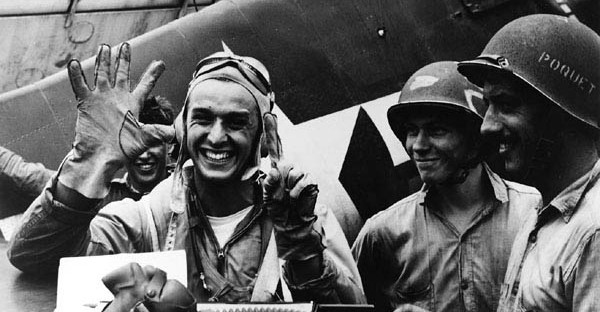 It is a shame to start February off on a note of regret, but I didn’t feel I could let the passing of US Navy ace Alexander Vraciu on the 29th January go unnoticed on this page. Without the brave men who flew these aircraft we love so much into war, we may very well not be here writing about them!

Alex Vraciu was born in East Chicago Indiana on the 2nd November 1918, just a few days before the first world war came to a close and the world was seemingly promised peace. I doubt anyone could have predicted that just 24 years on from that day Alex would be fighting in a very different and new war.

After graduation from DePauw University in 1941 he soon enlisted as a Navy pilot in the Navy Reserve. In August 1942 he was commissioned as part of the reserve and was soon enough promoted in March 1943 to join the VF-6 Squadron under the navy’s first ace of the war, “Butch O’Hare.”

O’Hare soon singled Alex out and made him his wingman, it was during these early days that Alex was able to learn a great deal about air combat in the Pacific. In October the squadron entered combat, with the carrier USS Independence as their home.

On the 10th October Alex claimed his first kill, tracking a Zero until it landed at Wake Island, where he then strafed it. Soon after he shot down a MItsubishi G4M Betty bomber.

The Fighter Collection’s Hellcat is the actual aircraft in which Vraciu achieved his ace status.

Soon enough he had gained the status of Ace, earning his five kills with the downing of three more Betty Bombers on the 29th January 1944.

As seemed to be becoming a theme with Alex, all his kills seemed to come in batches, the 17th Feburary was no different, when he shot down 3 Zeros and a Rufe, taking his already impressive tally up to 9.

VF-6 were due to return to the states following their initial tour on the front line, but this wasn’t for Alex. He requested an extended combat stint, the Navy obliged and transferred him to VF-16 on the USS Lexington. Two more Zeros were added to the list followed closeley by another Betty, forming kill number 12.

Alex was obsessed with Betty bombers at this time, as he had been told that it was a Betty which shot down his old wingman, Butch O’Hare on the 26th November 1943. 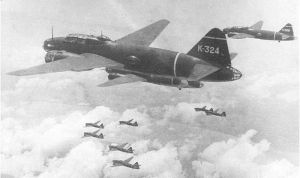 The 19th June must go down as one of his greatest days though. In what became known as “The Great Marianas Turkey Shoot”, Alex not only shot down Six “Judy” dive bombers on one mission, but they were all claimed in just eight minutes. All of this was achieved with a broken supercharger!

Alex then went on to add one more Zero to his list, on the 20th June, which would become his final kill of the war. But it was the mission itself that over-shone this moment, it was known as “The Mission Beyond Darkness”, a mission which Alex believed he never would return from as they were so outnumbered. He later had to escort a heavily damaged TBM back to the carrier and assist with its night landing. 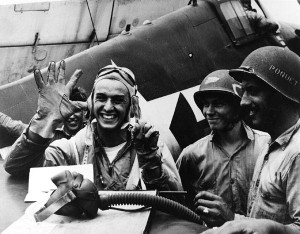 Alex clearly in no doubt over how many aircraft he had destroyed following the “Turkey Shoot” in June 1944. – US Navy

After this final kill Vraciu relented and returned to the states and carried out a tour of public relation events, but within a few months he’d managed to talk himself back into the firing line with VF-20.

On the 14th December 1944 Alex, as he put it “ran out of luck”, being shot down by anti aircraft fire near clark field in the Philippines. Following parachuting to safety he spent the next five weeks with the USAFFE guerillas. He soon found himself commanding 180 men marching to meet further US forces before being forced back to the states.

Vraciu ended his war as the fourth ranking us Navy ace, having shot down 19 enemy aircraft.

After the war Alex went on an extensive public relations tour, shortly after he became a test pilot at the Naval Air Test Center at Pautuxent River. While at “Pax River”, Alex got to fly all manner of aircraft both allied and axis. He very nearly got the opportunity to fly a captured German ME262 but this was lost on an earlier test flight before he got the chance. Alex eventually became Commanding officer of VF-51 flying FJ-3 Fury jets.

Alex’s Hellcat in Hangar 2 at Duxford.

During his wartime career Alex’s weapon of choice was the F6F Hellcat, the last of the Grumman fighter range to see active service in the second world war.

Here in the UK we have an important piece of Alex’s personal history. Based at Duxford, the Fighter Collection’s F6F G-BTCC was flown by the man himself in combat. In fact his first sortie on this aircraft was the day he became an ace on the 29th January 1944. It currently wears his wartime colours whilst he was with VF-6.

One of the things that made me want to write this piece is that one of my earlier warbird memories is watching an old Flying Legends video from 2003, in which Alex gave a short interview from his home in Calafornia.

In this interview it was the Bearcat, rather than Hellcat Alex spoke of. Shortly after the war he was the acceptance pilot for the new F8F and decided to engage a Tigercat he came across. To his surprise the Tigercat was able to outfly him, even in the very impressive Bearcat! It later transpired it was another old ace, Marine Marion Carl.

This is how Alex would have expected his encounter with Marian Carl’s Tigercat would have gone. In reality, quite the opposite.

Alex has visited his old mount at Duxford many times, it is always a wonderful moment to see veterans reunited with their old mounts and it is fitting that Alex’s Hellcat will now fly on.

It is a bittersweet coincidence that Alex passed away on the 29th January 2015, 71 years to the day that he clocked up that all important fifth kill and entered the history books.

A true aviation Legend in every sense.