On the 25th November 1940 an all new, bright yellow, wooden twin engined aircraft took off from Hatfield aerodrome. We all of course know the story and know that the aeroplane in question was the prototype Mosquito, a design which would go on to achieve legendary status throughout World War Two.

The impressive sight of three Mosquitos in one hangar.

The prototype was built in a small hangar, disguised as a barn, close to Salisbury Hall at London Colney. 75 years on that very same aircraft is being put back together just a few hundred yards from the same spot.

Many of you will know that next door to Sailsbury Hall you can now find the de Havilland Aircraft Museum, Formerly known as the Mosquito Museum this establishment houses a number of aircraft from de Havilland’s legendary history. 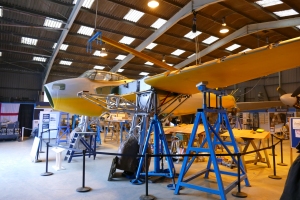 Of course the gems of the collection are the three Mosquitos, which for the first time sit together, in a fairly complete state in the same hangar.

The TT.35 TA634 has been on display at the museum for a number of years having been restored to static condition in 1990 for the museum. This aircraft is the furthest development point from that first aircraft, representing the last of the bomber versions of the type.

Another Mosquito that is fast approaching completion in the hangar is FB.VI TA122, my personal favourite variant of the type, with its imposing gun and cannon laden nose showing real intent. This restoration as shown real progress in the last year or so and the aircraft now sits on its wheels. 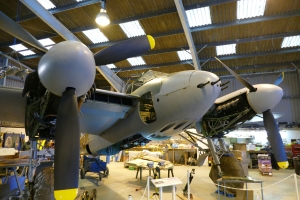 Of course, from a heritage point of view the prized example has to be W4050, the first of many Mosquitos to take to the sky. It remains one of the very few World War 2 era prototypes to have survived the war. The aircraft was luckily saved from being destroyed in 1946 by W.J.S Baird, who placed the airframe into storage at Hatfield and various other sites around the country. In 1959 this famous example was restored to former glory and put on display at the fledging museum at Salisbury Hall. A few years ago the decision was taken to dismantle the prototype and undergo a major restoration.

A Closer look at the Prototype airframe

After years sitting in the main hangar the museum in a number of bits the prototype’s wings and fuselage were finally put together again on the 14th November. At the time of my visit in March the undercarriage and left hand engine mount had also been added.

The strip-down process has unearthed a number of interesting features of the prototypes design, the large patch halfway down the fuselage, which was put in after accident damage, is clearly visible at the moment, as are the mountings for the slats. The prototype was the only Mosquito to feature these slats as it was later found they were not necessary. This will be the first time they have been seen without a layer of fabric and paint covering them in some years. 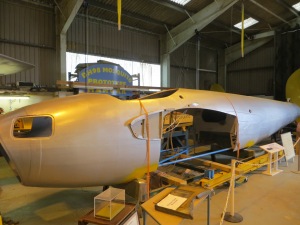 Fuselage of W4050 prototype back in October.

As can be seen from the photographs in this piece, the aircraft has already had a coat of that distinctive trainer yellow on the underside. It has been decided that for this rebuild the top surfaces will be painted in camouflage. The restoration team hope to have the prototype completed in time for the 75th anniversary of the first flight on the 25th November.

The prototypes recent progress has allowed unique shots such as this to be captured.

I love the Mosquito, so it is of no surprise that recent developments led to my visit, but its important to mention a number of other impressive exhibits the museum has on display.

The Mosquitos aren’t the only restoration project on site either, a DH.89 Dragon Rapide is growing steadily in the museum’s workshop.

There are a pair of Dove/Devons on display, which the public are allowed to get on board and have a look around. This same access is granted to the 4 engine variant, the Heron. In the aircraft park outside the hangar along with the Heron is a Comet fuselage, Chipmunk, Vampire and Venom.

The Venom, Vampire and Heron outside the hangar.

Further around the corner the museums Sea Vixen can be found, behind which is another hangar housing some of de Havilland’s civilian designs.

Greeting visitors in this final hangar is the fuselage of a Queen Bee, a Tiger Moth modified to be flown via remote control, this is also joined by a complete Tiger Moth in behind.

Hornet Moth G-ADOT can be found on one side of the hangar with wings folded, offering visitors the chance to get a close up look inside one of the company’s classic designs. 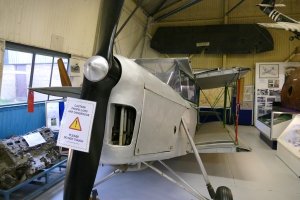 A detailed shot of the Hornet Moth’s air speed indicator.

This hangar is also home to a Horsa glider cockpit and fuselage section as well as a DH.53 Hummingbird as well as the unique Cierva C.24 auto-gyro based on a Puss Moth, the gyro is on long-term loan from the science museum.

The Puss Moth Based C.24

The interior of the Horsa fuselage section.

Of course as well as many aircraft on display there are a huge array of engines, parts, models and historical displays, including an account of de Havilland in World War 1.

A DH9 rudder, one of a selection of Great War artefacts on display.

The de Havilland Aircraft Museum is certainly a special place, a museum devoted to one manufacturer has the potential to have a very narrow range of exhibits. While of course the Mosquito remains the museum’s main attraction there are a huge amount of other interesting and rare exhibits that just go to highlight what a remarkable company de Havilland was.

The attention to detail of the restoration team is very impressive.

The museum Staff always seem happy to talk about the aircraft and make for an enjoyable visit, this combined with close up access and in cockpit views of many aircraft makes the site a must visit. The ongoing Mosquito restorations will make you want to visit again and again.