Last month on this page I published a number of Spitfire posts, a number of which dealt with the ever growing family of airworthy examples surviving around the world.

Recently this number has grown again, with Spitfire Mk XIV NH799 returning to flight on the 2nd of April this year. The aircraft has been under restoration at Avspecs based at Ardmore in New Zealand for a number of years.

NH799 Rolls Out at Omaka – Photo by Errol Cavit

Originally delivered to 9 MU in 1945 ‘799 was later transferred to the Indian Air Force in 1947. The Spitfire stayed in India until being recovered by Doug Arnold in 1981, soon the dissasembled airframe was back in the UK and remained in storage until 1985. 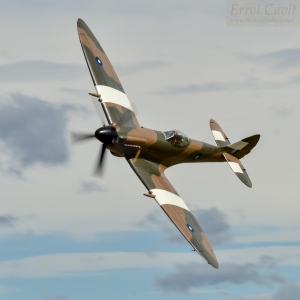 On the 21st January 1994 NH799 took off on its first post restoration flight, registered as G-BUZU. A month after this flight the aircraft was shipped to its new owners.

Once in New Zealand the Spitfire received its current registration ZK-XIV and became a part of the Alpine Fighters Collection.

Once in New Zealand the aircraft went on to fly at airshows until tragedy struck on the 2nd January 1996. While taking off from the grass runway at Wanaka, ‘799 swung off of the runway before leaping into the air. Unfourtunatley once the aircraft got airborne the tail clipped a boundary fence, causing the aircraft to roll inverted, tearing off the left wing.

Sir Tim Wallis, was at the controls at the time and was seriously injured, this accident tragically put his flying career to an end.

Following the accident the Spitfire was sold to Pacific Aerospace Corporation until 1999. The aircraft was then sold to Aviation Trading Company Ltd, who started the restoration work with Avspecs in 1999.

The unique sight of 3 Spitfires together over New Zealand. – Errol Cavit

The Avspecs team are of course well known for their outstanding work, notably on Mosquito KA114, and this Spitfire certainly seems to live up to it. While I wasn’t fortunate enough to see the aircraft in the flesh, I have kindly been granted permission to use Errol Cavit’s excellent shots of the aircraft.

Not content with the achievement of the first flight on the 2nd April, Pilot John Lamont then hopped back in the aircraft to fly a 75 minute ferry flight to Omaka, where the Classic Fighters airshow was taking place.

As can be seen from the photograph above, the arrival was well after sunset on the Friday before the show and must have been an amazing sight for all on the airfield.

NH799’s arrival marked the first time since the war that three Spitfires have flown together in the Southern Hemisphere, it is also the first time a Griffon engine Spitfire has been seen on the Continent since ‘799’s brief flying career in the 1990s.

NH799 getting airborne for the display. – Errol Cavit

Though long term the Spitfire is destined to be based out of Omaka, with the Chariots of Fire syndicate. However there was still minor work to be completed following the show and NH799 was noted back at Ardmore by the Monday evening.

It is fantastic news to welcome another Spitfire to the airworthy population.

2 thoughts on “Spitfire NH799 Takes to the Skies”