I didn’t have the highest of hopes on the drive over to Abingdon on Sunday morning, I should quickly clarify that any ill feeling was squarely aimed at mother nature and the weather and was to say nothing of the line up.

Abingdon has long been a traditional season opener and always manages to pull in a few surprises, combined with its country show element, it makes for a very relaxed and enjoyable start to the year.

This year had all the hallmarks of being one of, if not the strongest showing that the show had put on for a number of years, with a great balance between warbirds, classic jets, aerobatic aircraft and a few up to date machines to bring things full circle.

The RV8TORS put in a great opening display.

Abingdon always seems to fall foul of its position as the first of the season, as is the case with aeroplanes of all ages technical problems can always play a part in the lead up to the busy summer months which can often mean to drop outs and cancellations. 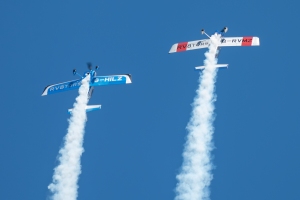 Always an entertaining display with plenty of fast formation aerobatics.

This is where Abingdon seems to have something of a Midas touch. Following the Facebook group in the lead up to the show I watched as a series of aircraft pulled out, which would be a blow to many shows, however on every occasion a replacement was found.

The build up to the show, despite the cancellations had me filled with anticipation, the weather forecast, not so much! As the weekend progressed however, the weather was starting to look as though it might just be alright.

As the day went on things started to pick up and soon it was time to things to start. Kicking the show off were the ever impressive RV8TORS, whose close formation flying and punchy aerobatics always make for an imposing display and provided a great start to proceedings. This was followed by a very graceful demonstration of the Bulldog, flown by airshow legend Rod Dean, though Rod had some pretty awful conditions for his display, battling with driving rain. 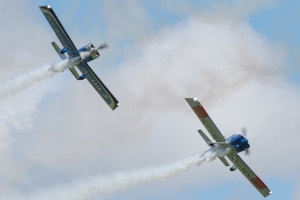 Unlike later on in the day this shower only lasted a few minutes and things cleared up just in time for one of the aircraft that I was looking forward to the most, the North American OV10 Bronco. The Bronco has been on static for a number of the Abingdon shows and has long since been a type I have wanted to see display.

The Bronco getting airborne from a wet Abingdon runway.

Taking off form the wet runway the Bronco was a spectacular sight, departing straight into its display. A low cloud base kept things flat but a dynamic and noisy display was still put on with plenty of impressive top side passes showing how manoeuvrable this distinctive machine can be, starting a display with a slow pass in landing configuration was a refreshing change as well. 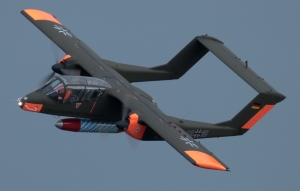 A nice topside pass from the Bronco.

Another great 1960s turboprop was the next to get airborne in the shape of Shorts Skyvan G-PIGY carrying the displays parachuting teams. This year marks the first year of the Skyvan Demo Team, who hopefully will receive a few bookings this year, it will certainly be a welcome addition to the circuit.

An impressive knife-edge pass from the OV10.

An unexpected highlight was the incredibly energetic display from the Calidus Auto-Gyro, a refreshing change to see one of these designs on an airshow line up, they certainly seem to be having a resurgence of late. Peter Davies put on a great display complete with smoke system and tight turns at times making the little Gyro sound like a chinook thundering around! 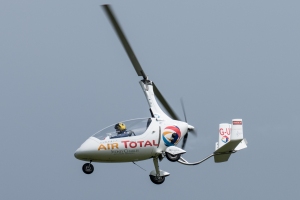 Autogyro during a surprisingly sprightly display.

Things seemed to be going so well and then the Heavens opened yet again, Typical!

During this heavy downpour the Gnat display team managed to put on a dynamic display in truly horrendous conditions. I was hidden beneath an umbrella for the duration so didn’t manage to get any shots of the team, not that it would have been easy in that weather anyway.

Once the Gnats cleared off into the murk things packed up for quite a while due to low cloud and heavy rain. After getting thoroughly soaked through I was starting to wonder if things might get called off.

The moment many of us waited through the rain for. (Apologies for the image quality).

Back in the warmth of the car a quick scour of twitter revealed that the Typhoon had been holding in the area and that the BBMF Spitfire was taxiing out at RAF Brize Norton just down the road. Amazingly things had cleared up just enough for Abingdon to see the debut appearance of the Battle Of Britain 75th Anniversary synchro pair demo. It was well worth waiting through all that rain for.

The Synchro pair routine looks set to be a high point of the 2015 season.

A well paced display and a truly impressive routing, the camouflage Typhoon really helps this tribute to the Battle Of Britain as well, in fact, the display is probably worthy of a posting all by itself, if only i’d got some better shots!

Amazingly following this display the weather stepped up again allowing the Meteor NF11 to display in some very rare sunshine. While it was a disappointment to many to loose the Canberra and subsequently the Meteor T7 from the line up, it was great to see the night fighter variant performing at an airshow again after what seems like many years missing in action. Perhaps a sign that the return to Coventry may be good for these jets getting out and about. The Meteor flew a very graceful display showing off the lines of this early jet to good effect. 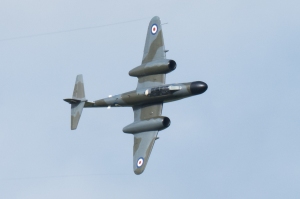 The NF11 coming round for a top-side pass. 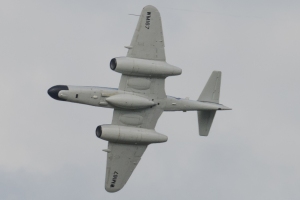 An underside shot of the Meteor. 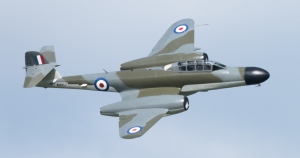 This was followed by an energetic routine from Kennet Aviation’s T6 which was able to take advantage of a slightly higher cloud base and enjoy some aerobatics. Aerobatic content was further bolstered by the twister duo who always put on an impressive routine.

It is astounding really that with such awful conditions the show managed to happen at all, let alone that it only lost three of the acts to adverse weather! Nearly a full show was put on, albeit somewhat delayed. Special mention has to go of course to the Abingdon team as well as the Synchro pair who really made an effort to get to Abingdon and provided quite the treat for those of us who waited on through the rain.

A challenging start to the season without doubt but one I certainly think all the performers and organisers can be proud of. Now who do i see about arranging wall to wall sunshine for the rest of the summer?

This was also my first real attempt at airshow photography with the new camera, I can’t say I am totally happy with the results but the weather did provide challenging conditions, lessons learnt for next time out!