Driving up to Biggin Hill in decidedly gloomy conditions didn’t bode well, heading down the M20 the clouds and mist were even covering the lower ground, I hated to think what it would be like up on the “bump”.

Things weren’t quite as bad upon arrival however, while the skies were grey and the clouds were still well below 1000ft, it was looking a little brighter. The temperature however, was decidedly chilly for mid-June.

This show was one which I had long been looking forward to, missing out on Biggin’s return to flying displays last year, I was intrigued to see how the new format was working. This was helped of course by a superb line up of Battle of Britain types and other warbirds.

As the morning played out the clouds started to lift, and there were occasional brighter patches building. As a result of this inclement weather preventing many aircraft flying in, the static line-up was a little thin. A number of interesting civilian types could be found on either end of the flight line. Towards the left hand side of the field the Shipping and Airlines fleet of 1930s touring aircraft were lined up on static display, with the gem being the collection’s de Havilland Dragonfly.

The Biggin Hill Heritage Hangar fleet were well represented, with three Spitfires, TA805, RW382, MK912 and Hurricane AE977 positioned on the cross runway outside the hangar.

EADS 109G was the star of the show, joining the static line up mid morning.

The static display improved greatly when I heard a huge roar of a big piston firing up over the far side of the airfield near the terminal. With such a loud, echoing growl, it could only have been the star of the show. Appearing from over the hill came the EADS Messerschmitt BF109G, which was making a very rare UK appearance on visit from Germany. The Messerschmitt joined the static park and was placed in a great position both for up-close viewing and photography.

The aircraft’s positioning in the static park offered great access.

The flying entertainment began with the deaparture of the Red Arrows, who had the duty of performing in the planned Queen’s birthday flypast over London. While the cloud base remained too low for the rest of the planned contingent to fly over the capital, the Reds managed to get out of Biggin in time for the display. 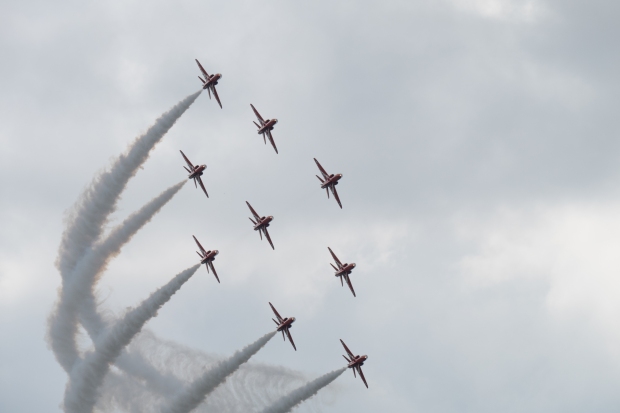 The Red Arrows are always a welcome sight at any show.

The Reds depature was followed by the first of a number of Large Model displays, the first of which featured a large number of WW2 warbirds, being flown en-masse which made for an impressive spectacle.

Steve Jones kicked off the flying proper with a solo Matadors routine, as his teammate Paul Bonhomme was unable to get his aircraft down to Biggin Hill for the day. 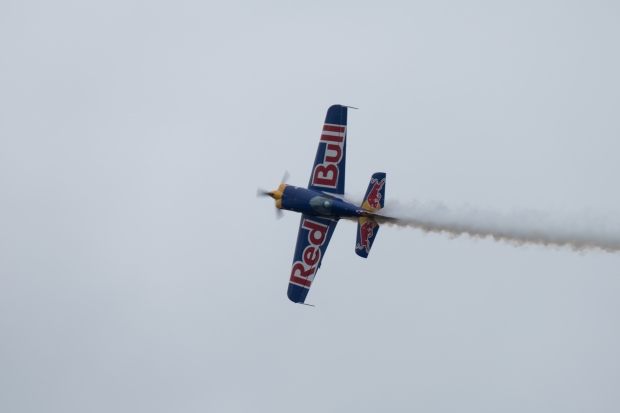 While the weather had improved sufficiently at Biggin for flying to get underway, conditions around the rest of the country were considerably worse, especially to the North. This meant that the first hour or so of the show was very hit and miss, with a number of cancellations. The model flyers did a great job of filling in the gaps when needed however.

The model flying got an extended slot, as the second act of the show should have been the little and large duo of Extra 300 and a 40% scale model of the same machine, sadly due to weather at Little Gransden, the full size machine wasn’t able to make it, leaving the model to put on an impressive display by itslef.

Though the poor weather up north meant that the ARCO Buchon and the Blenheim were unable to make it to biggin, there was still much to look forward to with the Battle of Britain tribute.

This segment featured the star act of the display. Taxiing out alongside the Biggin Hill Heritage Hangar’s Hurricane, was the aforementioned 109. It performed an impressive take off, tucking the gear in nice and early, before what can be best described as a zoom climb to the hold.

The 109 was joined by the Biggin based Hurricane.

Clive Denny kicked off proceedings with a gentle, flowing display in the Hurricane, repainted for this season in Battle Of Britain colours, representing an aircraft flown by Pete Brothers, an ace from the Battle who flew out of Biggin. As the Hurricane completed its display it was time for the 109 to make its presence felt, diving in from height positioning for a series of strafing runs over the airfield. These passes were aided by the excellent pyrotechnics lined up on the ground.

Clive Denny brings AE977 in for a topside pass.

This was the first time, certainly that I can remember, seeing a “real” 109, with a Daimler-Benz engine. I am aware of course that this machine is in fact a Buchon with the German engine fitted, but it still looks and sounds like the real deal. The festival of flight team should, and have received huge congratulations for securing such an impressive booking in this annivesary year.

The Daimler-Benz powered 109 climbing out from a “strafing” run.

As the 109 cleared it was time for the German “bombers” to come in and cause a bit more damage to the runway, the overcast skies certainly helped the imagination on this occasion. As the three Spitfires got airborne a huge series of expotions were let off near the left hand of the runway.

Biggin Burns: The impressive aftermath of the “Bomber” attack, shortly after the Spitfires got airborne.

The Spitfires were then led through a tight tail chase, always a stirring sight. After the Spitfires had circled for a few minutes the 109 appeared again in the overhead, soon being picked off by Dan Gritthiths in one of the Spitfires. 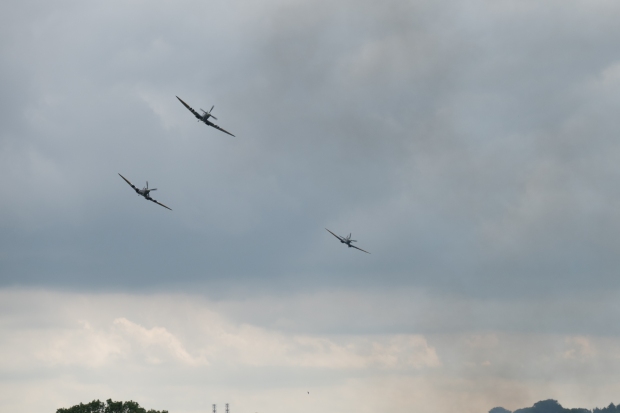 The three Spitfires diving through the smoke.

What followed was perhaps the most realistic dogfight demonstration that I have ever seen. Incredibly tight turns from both aircraft really gave the impression of an actual struggle and desire for both to gain the upper hand. This being Biggin Hill of course, the Spitfire won!

The finale to the Battle Of Britain segment saw all 5 aircraft coming through for a formation pass. A fitting tribute and a nod of things to come as we move towards two months of tribute formation and displays. Even though the Blenheim and Buchon were missing this routine was very impressive.

The Hurricane and 109 led the final formation pass of the Battle of Britain segment.

Following another model interlude, it was time for the RAF to take over, starting off with the red arrows. The team unsurprisingly started off with a flat display, and a very impressive one it was at that. perhaps I havent seen them at a small enough venue lately, but everything seemed much more impressive and close up this year, with the Syncro pair proving hugely entertaining once again.

The Reds put in their usual polished display.

Following their display the reds left to join up with the BBMF fighters, which provided one of the most impressive scenes of the day. It is rare enough to see five of the BBMF fighters displaying together, rarer still to see them tucked up behind the red arrows, another great moment that made all that waiting in the rain worth it.

A magic moment – 5 fighters from the BBMF joined the Red Arrows for a memorable pass.

Following this pass the BBMF fighters came back for a superb sequence of formation passes, the first and last of this segment certainly put the rumour that BBMF don’t do topside passes to bed, wonderful.

The BBMF fighters on their opening pass.

The Memorial Flight weren’t finished with Biggin yet though, there was still the Spitfire and Typhoon Synchro pair to complete. Much like at Abingdon earlier in the year the Camouflage Typhoon was used and on this occasion the Spitfire Mk II P7350 led the Typhoon in. This Spitfire, being a genuine Battle of Britain veteran was the obvious choice for this two ship, but as yet hadn’t been used the role. ‘350 is my personal favourite of the BBMF’s fleet so it was a joy to watch the pairs routine and to finally catch the special Typhoon in sunlight!

Together at last: Battle Of Britain veteran Spitfire Mk II P7350 joins the special scheme Typhoon for the Synchro pair.

Breaking up the wall to wall Spitfires and Hurricanes was Peter Teichman, who made a very welcome return in his P-40M “Lulu Belle”, which had only returned to flight a few days prior to the show, having been grounded with engine problems since late 2013. Peter had already impressed with a breathtaking arrival run and break earlier in the day, so it was clear his solo display would be something to be cherished. That it was, with plenty of low, sweeping passes, thankfully the clouds had lifted sufficiently for the P-40 to put on a full display with plenty of looping action, that new Allison certainly sounded great as Peter wheeled around the Kentish skies. 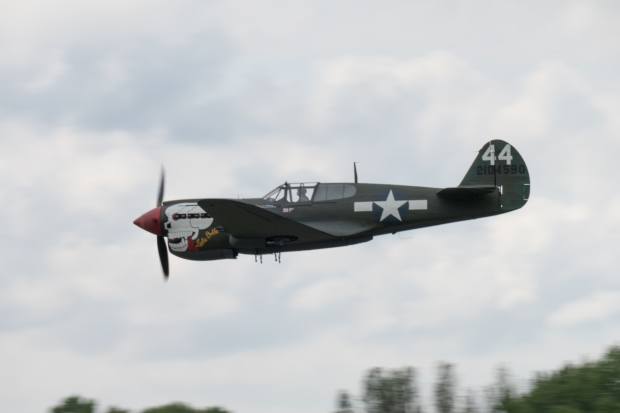 Peter Teichman brings Lulu Belle in for a low pass.

It wouldn’t be Biggin hill without a Spitfire Finale, rather than the traditional solo, as made tradition by Ray Hanna in the glory days of the air fair, a two ship display was lined up. Having been unable to perform in their usual mounts, the Matador pilots Steve Jones and Paul Bonhomme took up the Heritage Hangar Mk IXs to close the show.

It was a breathtaking display, low fast passes in tight formation, evoking images of the bygone days of the Hanna’s, combined with tight barrel rolls towering over Biggin. It really was one of those moments where words, images or even video cannot do the routine justice. We are lucky to have Spitfire displays as a very common occurence at UK shows but this was something else. A real “one add one makes three” moment.

Twin Spitfire? No, just what happens when you let the Matadors loose! Wonderful.

Though by no means the most original Battle Of Britain airfields remaining, in fact it’s probably one of the most developed still active, Biggin Hill has an atmosphere like no other, a Spitfire and this airfield creates a magic which can’t quite be placed. Which is why I can’t wait for my next biggin visit on the 18th August this year for the Hardest day commemoration gathering.

The Festival of Flight was an impressive event despite the cancellations and captured the magic that Biggin shows of old always had, securing the star item of the 109 was a master stroke and will no doubt have helped secure this show in the memories of many.  Traffic was still an issue on the way out, though based on the responses from last year, it is safe to say this was much improved. Hopefully this show can build from this success, perhaps moving to a two day format again giving the star items a better chance for better weather!