Vulcan effect or Blenheim effect? That was the question on Sunday 5th July….

The Shuttleworth “Pageant” shows are always flagship events for the collection, this years Military Pageant was no exception. With WW1 as a central theme the airfield looked the part with many Great War vehicles and re-enactors moving around the airfield, this was helped further when the First World War aircraft were put out on the flightline for close inspection, including the collection’s Camel.

It was great to see the Collection’s Sopwith Camel replica out alongside its stablemate, the Pup.

The star of the first world war paddock has to be the Bristol Scout replica, which has since flown, the aircraft was on the public side of the fence which meant visitors could get right up to the aeroplane and take a look into the cockpit. A nice touch that really helped the atmosphere of the day.

The Blenheim looked stunning sitting out on the grass during the afternoon.

The show had its fair share of visitors as well, in fact probably the best collection of visiting warbirds Shuttleworth has seen for a number of years, the first of which announced its presence mid-morning as it thundered over for a run and break. It was the Bristol Blenheim making its Old Warden debut since restoration, watching this classic Bristol machine turn finals over Old Warden is a sight I won’t forget in a hurry! 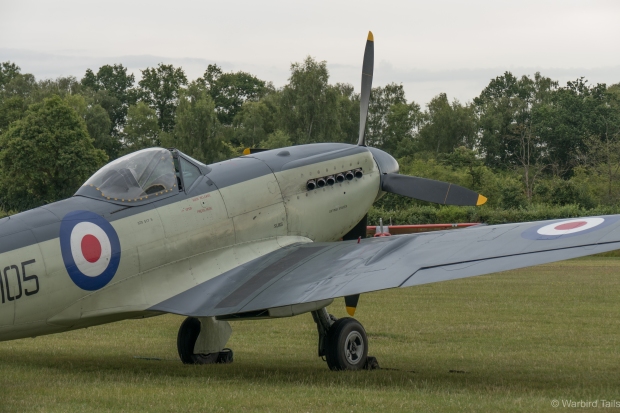 The Seafire was a very welcome last minute addition to the line up.

Blenheim aside, there were plenty of other wonderful aircraft lining the Old Warden fence including the welcome return to display flying for the Kennet Aviation Seafire XVII, which hasn’t been seen on the airshow circuit for a number of years. The Seafire was a very late addition to the display line up arriving at Old Warden the Friday before the show.

The star of the show for many waiting its turn in the hold.

The main attraction for many though has to have been the first act, the Avro Vulcan. As many of you will know this season is set to be this cold war giant’s last and many have been hoping for an Old Warden appearance for the bomber for a number of years. Well on the 5th of July we all got our wish, we were promised an adapted display to suit the venue and that was certainly delivered by Martin Withers. The opening pass shall stay lodged in my mind for years to come, passing low and slow near enough overhead before making the left hand turn past the control tower before powering away into the turn. 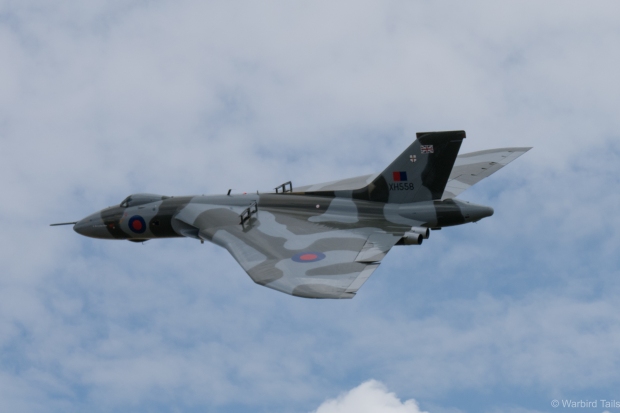 With such an up close display nearly every pass was a highlight, including a missed approach and a simply stunning final fast pass with smoke pouring from the Bristol Olympus engines as XH558 soared into the near vertical shaking the ground. Following that a trademark Vulcan wingover before the Bedfordshire skies fell silent again. Though it will likely prove to be the Vulcan’s only appearance at Old Warden it will certainly be one of the most memorable displays since the types return. 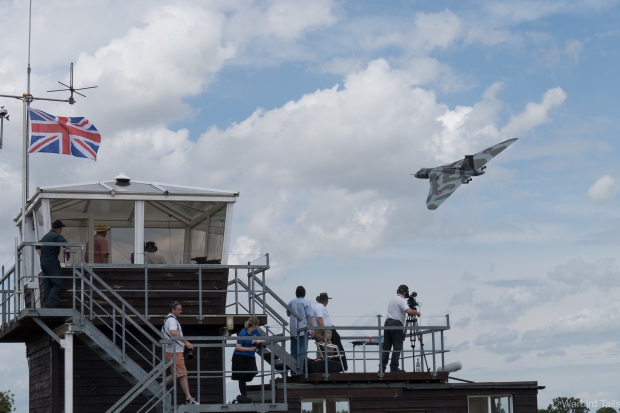 A classic Shuttleworth scene with a twist!

Following the star turn it was time for one Avro to hand over to another, this time the Avro 19/Anson which flew a graceful pairs display with the Old Warden based Dragon Rapide. Following their pairs routine each aircraft performed spritely solo displays, its always a pleasure to see these classics out on the airfield. 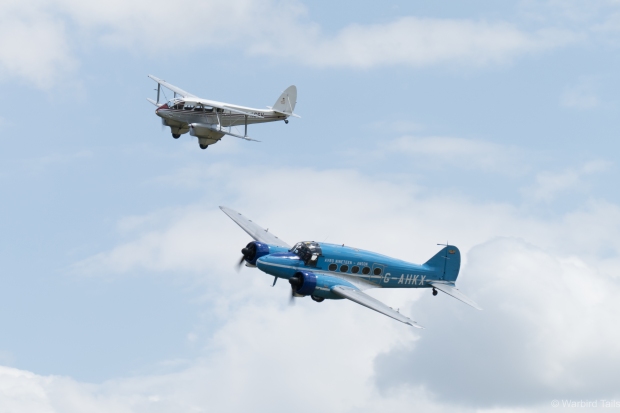 The Avro 19 and Rapide pair during their display.

Following these old transports into the display slot were two brief Spitfire appearances, the first from Peter Teichman in his Mk. XI, performing a run and break to land prior to his display slot later in the afternoon, the second Spitfire came from the BBMF. The Memorial Flight sent their Mk. V AB910 for the afternoon’s show and though it only performed three passes it certainly left an impression. I’m not sure I’ve seen an early Spitfire perform at such high speed before, a very impressive cameo.

AB910 climbs out at speed towards the clouds.

It was then time for the first glider outing of the afternoon, with the skeletal Eon Primary showing just how basic glider training can be!

It was then time for a WW2 set piece to take place, featuring the Gladiator and the Storch. This segment started with the Storch launching in the typically and comically short fashion we have become used to over the years, before performing a number of slow passes and flat turns close into the crowd. 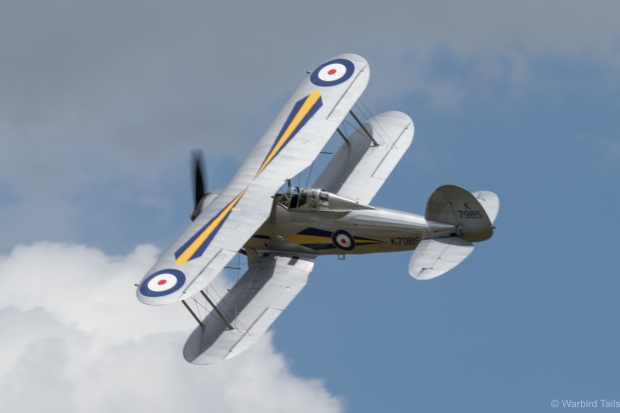 The Gladiator put in a typically fast paced display.

Soon though the distant purr of a Bristol Mercury could be heard as the Gloster Gladiator circled high overhead the airfield, before performing a diving attack on the Storch below. This then led to a number of cat and mouse passes as the Gladiator rushed in to get a shot only for the Storch to turn away low and slow. Eventually of course the Gladiator emerged victorious, celebrating with a sporty solo routine for the remainder of the slot.

Next up was a look at arguably the most important element of any air force, the training aircraft. First up was the Piston Provost, which performed high level aerobatics before being thrown around low and fast at low level. The Provost was followed into the skies by the trio of Avro Tutor, Tiger Moth and Miles Magister. The latter three performed a gentle display of formation passes and a low level tail chase before recovering to the airfield.

The Hawker pair were displayed in their usual beautiful fashion.

It was then time for one of those rare treats you can only really see at Old Warden, two of the wonderful interwar Hawker Bi-planes, in this case the Hind and Demon. The pair flew a number of passes in formation before performing a dynamic split in front of the crowd into solo routines. Stu Goldspink’s solo in the Demon was particularly impressive with plenty of tight turns and the distinctive Kestrel growl. 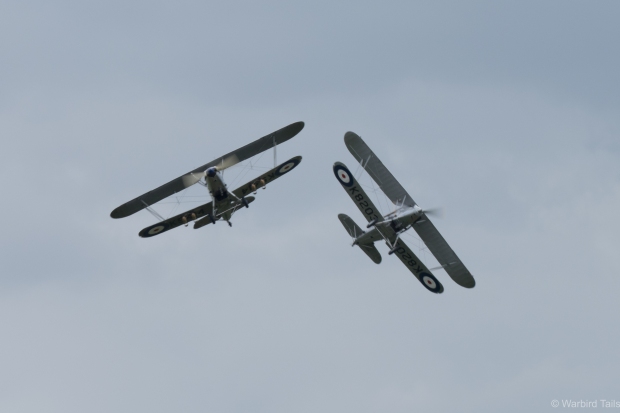 A dynamic break before the solo segments.

A pair of Yak 50s from the Aerostars were left to perform in the worse weather of the day, with some heavy showers passing through during their slot. Undeterred the pair put on a impressive display of classic aerobatic manoeuvres. 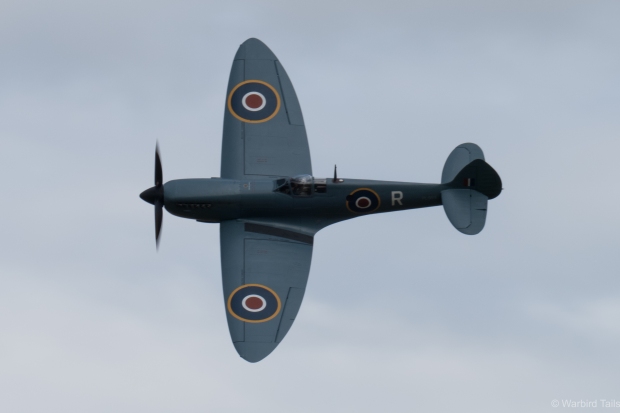 Peter Teichman’s Mk. XI Spitfire being put through its paces.

Then it was back to the Second World War with a typically polished low level routine from Peter Teichman in the Spitfire Mk. XI. For Old Warden to have secured three different variants of Supermarine’s most famous design was a great coup. 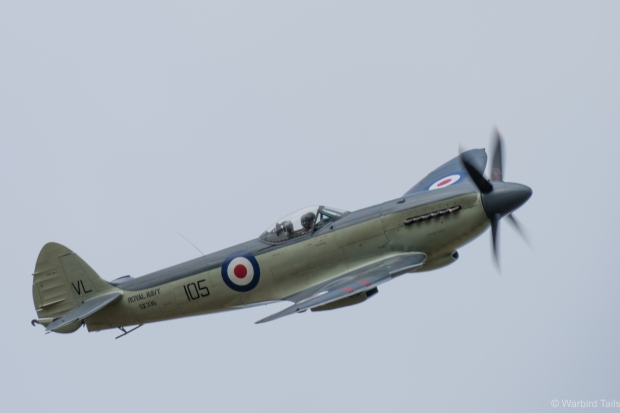 Following a superb pairs glider display, both of which launched from the same tug, it was time for another big highlight of the show. I remember many years ago, when the Seafire first flew, seeing the aircraft for the first time parked out on the grass at Old Warden, so it was fitting that its return to the circuit was here again. 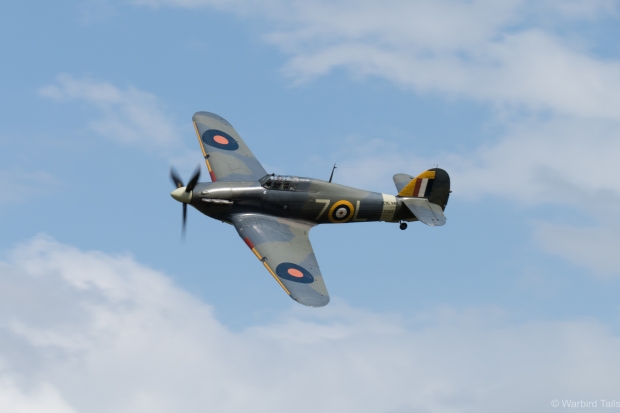 The Sea Hurricane joined the Seafire for a rare routine.

Getting airborne in challenging conditions with the Collection’s Sea Hurricane the pair returned from the hold performing a fighter sweep across the airfield before a short tail chase and on crowd break.

The Seafire then went on to perform a solo display in the hands of John Beattie, with the early short Griffon engine echoing around the airfield as he threw the aircraft through a number of aerobatic figures. This was followed by a typically imposing routine from the Collection’s Sea Hurricane.

Soon enough it was time for the Blenheim to take to the skies.

With the Naval fighters back on the ground it was time for the other star act of the day, as John Romain got airborne in the Bristol Blenheim. Echoing the Vulcan earlier in the day the first pass was a true sight to behold, low fast and on a knife edge as the tower approached. I have been fortunate to have seen the Blenheim perform a number of times already this year but when combined with Old Warden the display and the aircraft move to a different level. Much like the Vulcan earlier in the day John Romain perfectly adjusted his routine for the Old Warden display line.

One of many memorable passes that John Romain made during his masterful Blenheim display.

It will be of note by this stage that I am yet to mention the First World War aircraft taking to the skies, given the shows central theme. Sadly as the afternoon went on the wind began to pick up, to an extent that was even bothering the larger WW2 fighters, so it was understandable when the announcement was made that the WW1 machines had scrubbed.

The SE5a moving across to the control tower for the final ceremony.

The SE5 was taxied over to the control tower to take part in the final ceremony of the day, which was set to be a poppy drop from the Bristol F2B. In the end it was left to the Piston Provost to carry out this duty, but the effect was felt just the same. 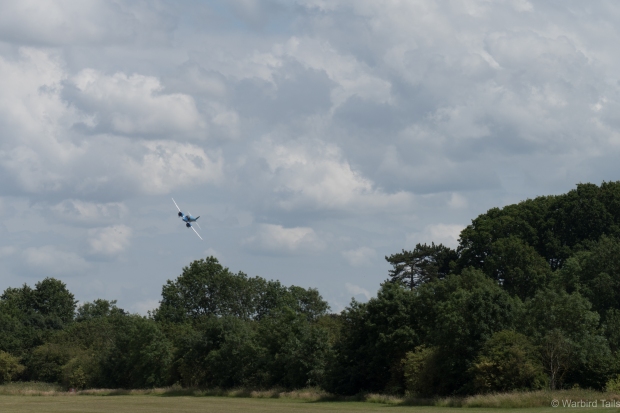 With dynamic displays and backdrops such as this, Old Warden is always a must visit venue.

While the weather left its mark on the latter half of the program this display certainly proved to be every bit the season highlight it was set to be. It was great to see Old Warden so full as well, massive congratulations have to go to the Shuttleworth team who had clearly prepared incredibly well for the increased attendance. Increasing the traffic management as well as the facilities on site, a masterclass.

As always at Old Warden the flying was superb and adapted well to changing conditions, I look forward to seeing what the Collection has to offer at the next show, the Best Of British Flying Evening on the 18th July.