Every now and again an airshow can deliver a moment so powerful that it has every chance of entering airshow folklore, the Duxford Battle of Britain tribute this year was without a doubt one of those occasions. The show was brought to a fitting close each day with a mass formation of 17 Spitfires (15 Spitfires and 2 Seafires). This wonderful sequence saw mass formation displays, formation aerobatics and a seemingly endless tail-chase display.

Brian Smith orchestrated the whole sequence and led the display in the Old Flying Machine Company’s Spitfire MH434, a legend in its own right. Brian brought the flying to a close with a graceful solo display in the Spitfire.

Along with the Spitfire finale there were plenty of other Battle of Britain themed highlights as seen below.

A sight many will remember from years to come. The first pass from the 15 Spitfires and 2 Seafires.

The Hurricane three ship running in.

N3200 climbs out ahead of the solo performance.

An undoubted highlight of the Spitfire finale, the Seafire III.

The Commanche Fighters Mk I pair.

The Gladiator was put through plenty of graceful loops and rolls.

Smoke On: The BBMF fighters join the Red Arrows during Sunday’s finale. 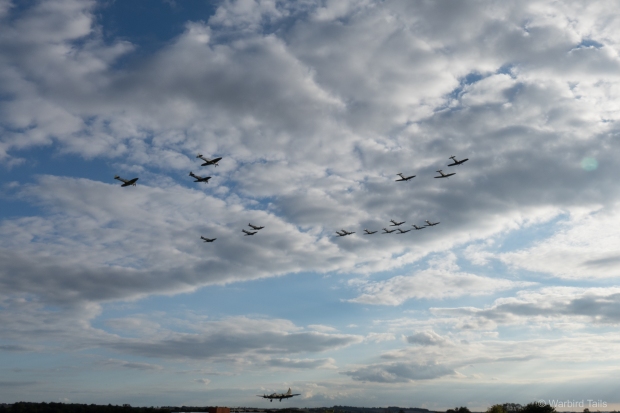 Sally B sneaks in underneath the first pass of the Big Wing.

Back to Base – Spitfire’s recovering.