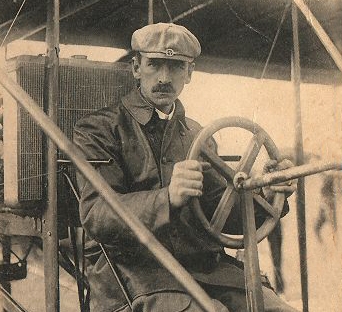 Glenn Curtiss was born on the 21st May 1878. Curtiss always had a keen interest in engineering and innovation. He opened up the first Curtiss factory, manufacturing motorcycles, in 1901. This obviously draws a comparison to the Bicycle building Wright Brothers,with whom Curtiss would have long drawn out legal battles and ill-feeling in the years to come.

The motorcycles won numerous awards over the years and Curtiss was able to claim a number of speed records thanks to the lightweight engines his company was producing. The Balloonist Thomas Baldwin commissioned Curtiss to build a special engine for an airship he had planned in 1904, this was Curtiss’ first aero engine.

After a number of years developing airship engines, Curtiss made a grand reputation for himself. In 1907 he was invited to join the Aerial Experiment Association, an organisation set up by Alexander Graham Bell, of telephone fame, to create a practical aeroplane design with its own powerplant. 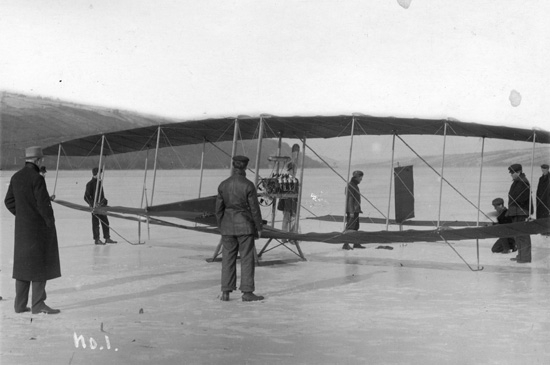 During his time with the AEA a number of “Aerodromes”, as aircraft were called back then, were constructed, ranging from the first “Red Wing” through to the “Silver Dart”

The AEA finished its work in March 1909 and Curtiss decided to take on the aviation development and design on his own.

The most notable design during the Pre-war period of Curtiss aeroplanes was the Pusher. This machine bore a slight resemblance to the early Wright machines, with a forward elevator, a bi-plane layout with a pusher engine. The ailerons on many of the pushers were mounted between the wings along the struts. 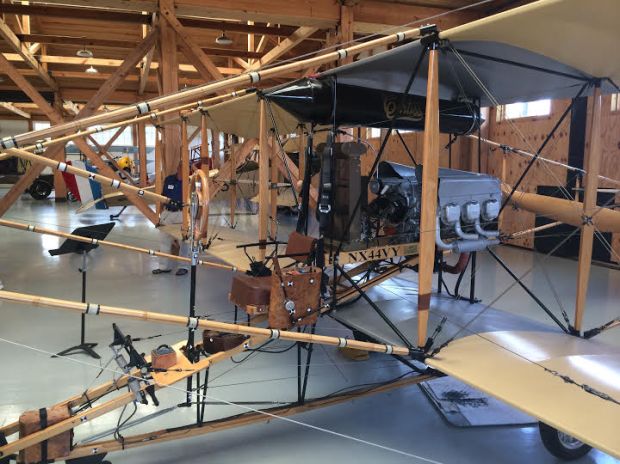 A close up look at the Military Aviation Museum’s Curtiss Pusher.

This first step for Curtiss on his own came as a direct development from the final AEA design, the Silver Dart. The early models of the pusher were single seat and used various engines throughout the development process.

The first Pusher which was also the first Curtiss Aeroplane Company design, was known as the Gold Bug, this was a single seat model ordered on the 2nd March 1909 for the Aeronautical Society of New York. 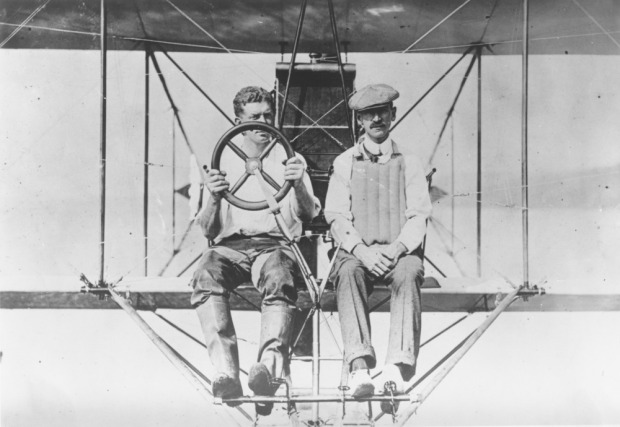 This image clearly shows the throw over two seat controls added to later pushers. Note the poles either side of each pilot used for leaning into turns. – SDASM Archive.

Curtiss’ motorcycle background became apparent when looking at the early aircraft controls evident in the first pushers. Pitch was controlled in the traditional manner, while the wheel controlled the rudder. Roll was achieved by leaning in the relevant direction. This method of turning ties in well with the idea of handlebars and leaning into the turn on a bicycle.

As the design process moved on improvements to the basic design were made, more powerful engines were used and a second seat was added. The two seater examples featured a “throw-over” yoke which would aid pilot training.

Though the designation “pusher” covers countless different aircraft with many different designs, these aircraft never received formal designations, they were simply identified by a distinguishing feature or by whoever ordered them. Retrospectively Curtiss did identify four key types for the Pusher design.

While the majority of the Pushers featured a forward elevator surface, they all also had the same control on the rear. As time went on it became apparent that this front surface was not needed, as was discovered by stunt pilot Lincoln Beachey who removed this from the aircraft he displayed in 1910.

That first Curtiss design was revisited after the war when a one off Pusher was built at Garden City. This replica was ordered by Glenn Curtiss himself, and was long a fixture at the Curtiss complex.

With the Pusher development well underway by 1910 Curtiss turned his attention to the idea of Seaplanes. Curtiss’ first attempt at this featured a Pusher III with a canoe strapped beneath it, though this was found to create to much drag to reach flying speed. Though others had some success in this field before Curtiss, his work developing flat bottomed floats and experimenting in this area led to him being considered the inventor or practical seaplanes. 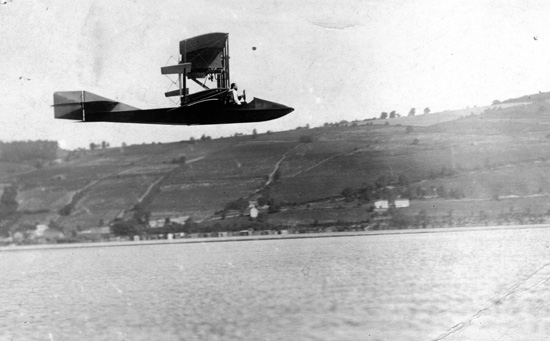 The Curtiss Model E or “Flying Fish” taking to the skies on its first flight in 1912 – SDASM Archive.

By 1911 Curtiss had developed the now familiar central float with wingtip stabilisers which remained the standard layout for decades following. Curtiss made his first successful seaplane flight in January 1911. Curtiss flying boats would become very important designs during the first world war.

Curtiss’ early days with flying boats will be explored later on in this series.

Alongside the Pusher and seaplane designs Glenn Curtiss also tried a number of tractor aircraft, early designs in 1909 and 1910 respectively came in the shape of Pfitzner and Ely Monoplanes. The Ely example, was a effectively a monoplane pusher designed at the request of exhibition pilot Eugene Ely. 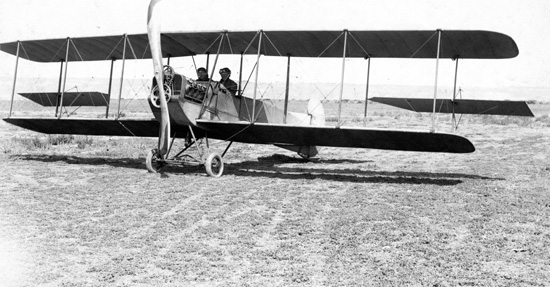 A tailwheel version of the Model G – SDASM Archives.

Development of the Pusher types were heavily affected by the Wright Brothers court injunction against Curtiss, largely based around his use of aircraft with ailerons. This initial complaint led to years of fighting between the two parties and severely hampered the development of the Wright and Curtiss companies, ultimately leading to no further Wright aircraft being developed beyond WW1. 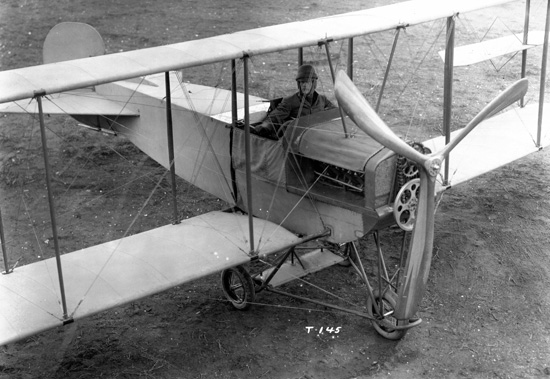 The Model G was certainly and eccentric looking machine, though its a marked step towards the iconic Jenny compared to the Pusher. SDASM Archive.

A familiar shape started to emerge in late 1912 when the Curtiss model G appeared as part of a US army order. The model G was a tractor biplane, which began as a tricycle undercarriage machine. Though initially designed in 1912 and 13, the first example didn’t fly until 1914. This first example was powered by a Curtiss OX engine of 90hp. this aircraft would eventually lead to designs such as the Model J and Model N, which would ultimately form the early seeds for the iconic JN-4 “Jenny”.

An Expert in Self Promotion

Curtiss clearly had a talent for designing excellent flying machines, but he knew this wouldn’t be enough on its own and he would have to strengthen both his own reputation and that of his machines. 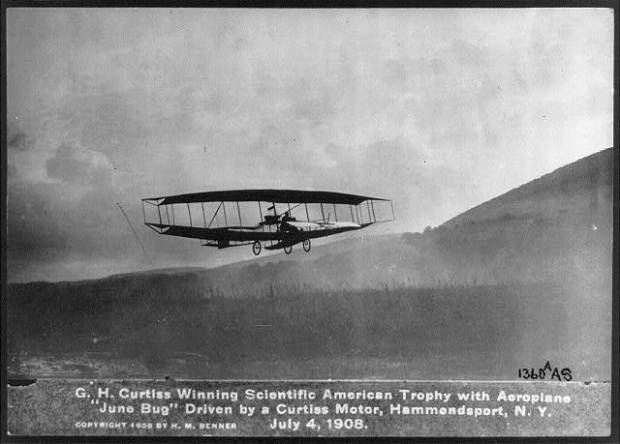 Starting as early as 1907 Curtiss had been setting records on land and in 1909 in the Golden Flyer (A later name for Curtiss No.1 Gold Bug) he won the Scientific American Trophy, a grand feat in his own machine (He had already won the competition in 1908 in the AEA “June Bug”.) He won the Gordon Bennett race in the same year and followed this with a third win at the Scientific American Trophy in 1910, this gave Curtiss permanent ownership of the trophy.

Alongside these performance awards, Glenn also won a number of design awards in 1912 and 1913 for his development work of the seaplane and flying boat.

It didn’t take Curtiss long to realise that military contracts is where the real money and success would lie in terms of aircraft orders. The problem was that at this stage in time the Army and Navy had little interest in this relatively new technology. This is where Curtiss decided to stage some demonstrations showing just how invaluable the aeroplane could become. 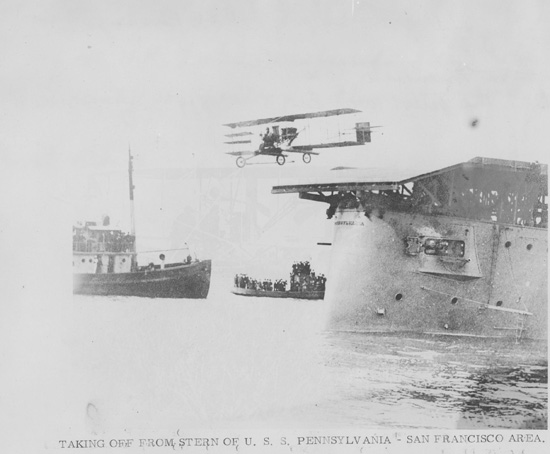 Ely taking off from the USS Pennsylvania – SDASM Archive

The first of these took place in November 1910 when Eugene Ely flew a Pusher off a wooden platform attached to the deck of the USS Birmingham before landing back on the shore. In January the following year Ely landed another Pusher on to a platform on the USS Pennsylvania. This landing run even made use of arrestor gear, similar to how carrier recoveries take place to this day.

Curtiss and his Pusher being hoisted aboard the Pennsylvania. – SDASM Archive.

In February 1911 Curtiss himself made a demonstration of the seaplanes versatility by landing alongside the Pensylvania before being hoisted aboard and later departing from the water again. These demonstrations paid off, combined with Curtiss’ offer to train one Navy airman free of charge, two orders for Pushers were in 1911. This began a long and prosperous relationship for the company and the US armed forces.

As can be seen Glenn Curtiss had a varied early career while developing these fantastic flying machines, his aircraft formed the basis for many great designs to come and his work in naval flying, seaplane development and aero-engine design would go on to leave a lasting impression on the aviation world. Another interesting point to note is that before going into the motorcycle trade Curtiss worked at Kodak and developed a keen interest for film and photography. As a result there is a huge array of period photos of the early Curtiss designs and testing. Something I’m sure we are all grateful now. 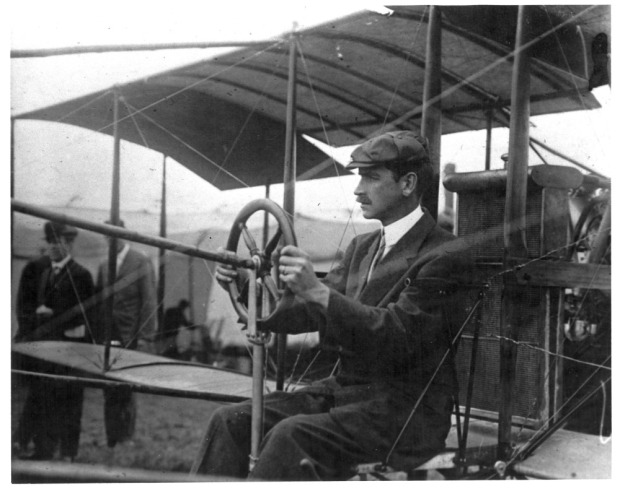 His early battles with the Wright Brothers proved controversial and ultimately led to both companies early development stalling, luckily for Curtiss he was able to build further and further success as WW1 carried on and, though he took a step back post war, he kept an advisory role on designs until his untimely death in 1930.

The next instalment of this Curtiss series, now that we have “met” the man himself, will be a brief summary of operating some Curtiss icons from a modern age legend, Mr. Kermit Weeks.

The majority of the pictures used on this page can be found at the excellent San Diego Air and Space Museum Archive on Flickr.