2016 has been an interesting year for Duxford. Following the events of the 2015 airshow season there was always going to be a strong spotlight shining on a venue which has a road as major as the M11 on the end of the runway. As documented in earlier reviews on this site this spotlight resulted in some low key flying at the May show and with some dramatic changes to the crowd line at Flying Legends in July. 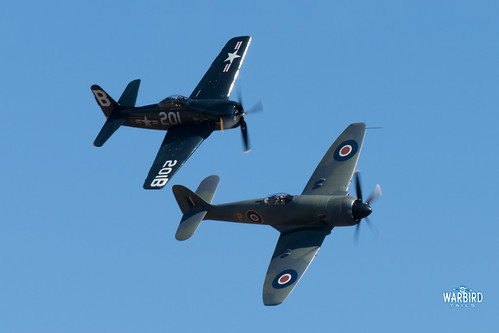 The changes made for Flying Legends improved the experience considerably and allowed the classic Duxford displays to be presented as they always have been. The Imperial War Museum kept some features of this new crowd line, such as keeping the tank bank closed. Sadly, due to the jet aircraft operating from the airfield for the September show the jet pan remained at pre-2016 distances. I was concerned this would have a negative effect on the experience but it made little difference to the viewing experience, especially with such an incredible line-up. 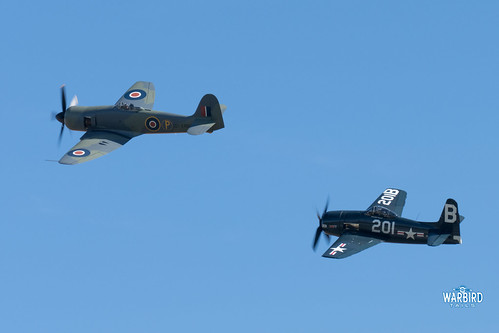 A pairing of ultimate piston fighters opened the show on both days with an incredible close formation aerobatic demonstration from Richard Grace and Pete Kynsey in the North Weald based Hawker Fury and the Fighter Collection’s Grumman Bearcat. This routine was a great throwback to Ray Hanna and Stephen Grey’s displays in the same paring back in the 1990s at Duxford. The sound of two big radial fighters in close formation performed aerobatics never gets old and its moments like this that makes Duxford so special. 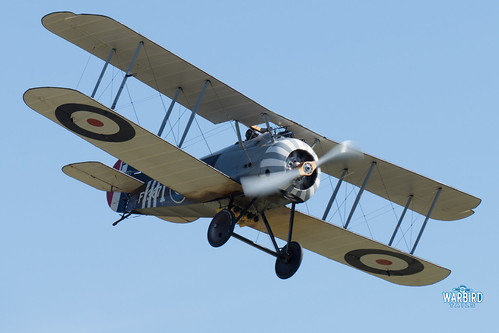 From one end of the scale to the other, the flying then turned to the First World War. The Great War display team gave a full display, complete with pyrotechnics. The team have really grown over the years and their clever use of layered display lines give what must be one of the most immersive illustrations of WW1 aviation currently displaying today. The WW1 Aviation Heritage Trust’s Sopwith Snipe and the Shuttleworth Collection’s Bristol F2b took centre stage next with a very unique pairs display. Jean Munn’s flowing solo in the Snipe was certainly a display to remember and it was a thrill to see a rotary powered type at Duxford. 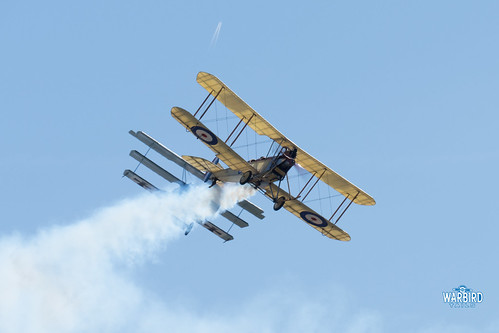 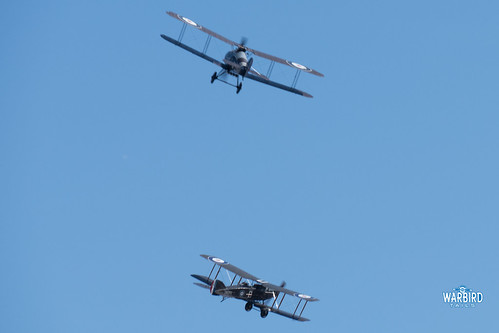 As is expected at Duxford, Spitfires played a huge part in this display. Alongside the incredible 14 ship finale display there was also a “Dunkirk” segment which saw a pair of Spitfires used in the filming of the upcoming Christopher Nolan film perform a mock dogfight with the Hispano Buchon which also took part in the filming. The Buchon showed off its realistic smoke system, adding a new dimension to the classic tail chase. This display also saw the debut of Spitfire V EP122 in its original markings, having made an appearance at Flying Legends in July in the temporary film markings. This Spitfire has a very special history having flown out of Malta during the war and being discovered off the coast of Gozo before being rebuilt to fly at Biggin Hill for Commanche Fighters. 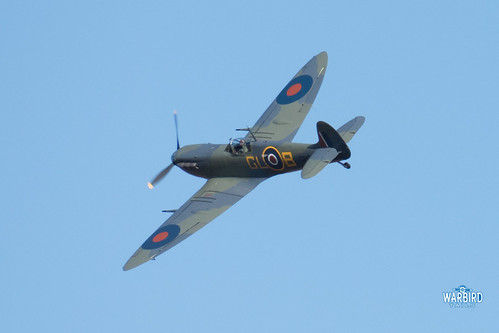 A classic 1930s biplane segment was another definite highlight of the weekend. Nick Grey has built a great reputation in recent years with his incredible joker aerobatic displays in the Gladiator at Flying Legends. It was a great surprise then to see Nick displaying at the September show as well. His display on the Saturday, when he had the airfield to himself was particularly memorable. I will never tire of watching Nick throw the Gladiator around the Duxford skies so gracefully. On the Sunday the Gladiator was joined by a Hawker Biplane trio consisting of the Hawker Demon, Hawker Fury and Nimrod II. 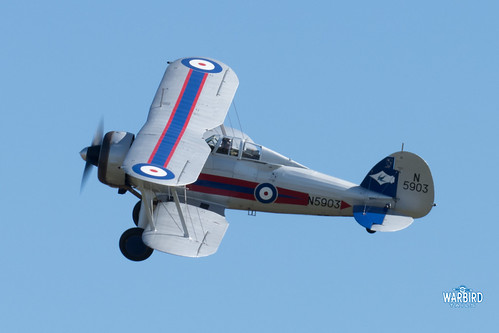 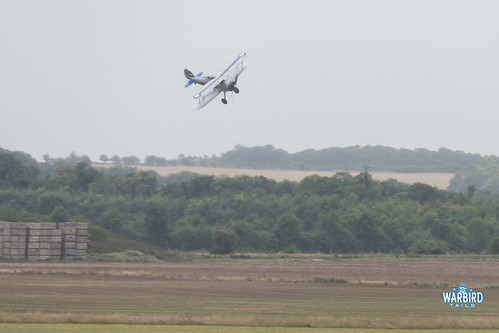 Another highlight was an energetic pairs display from two Chipmunks, performing formation aerobatics while the Aircraft Restoration Company Harvard flew below in a fitting tribute to the training aircraft that provided pilots for fighter aircraft throughout aviation history. The Red Arrows added to the training theme with their classic display of formation aerobatics. 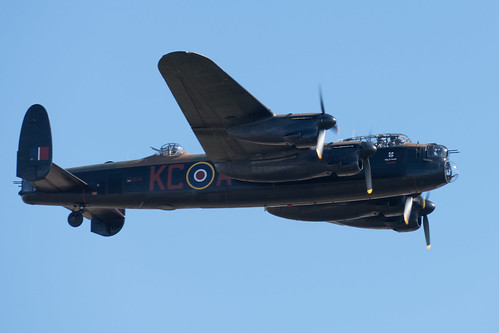 The impressive second world war line up was completed with displays from the Fighter Collection’s Corsair, B-17 Sally B, a welcome Duxford return from the Battle of Britain Memorial Flight Lancaster and a target tug demonstration from the Historic Aircraft Collection’s Hurricane with Skytricks’ Piper Cub on towing duty. 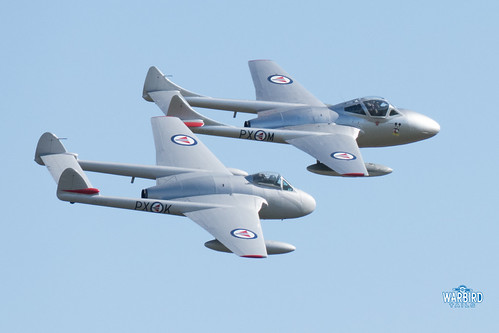 It was a welcome change to see classic jets back on the Duxford flightline, with none present at the September show in 2015 or this years May show. The Norwegian Historical Squadron brought their Mig 15 along with their wonderful pair of Vampires. The Mig was flown through a graceful display routine before the Vampires dived in for a mock dogfight with the Russian designed fighter. With the Mig back in the circuit to land the Vampires performed a graceful close formation display – a wonderful sight and sound. 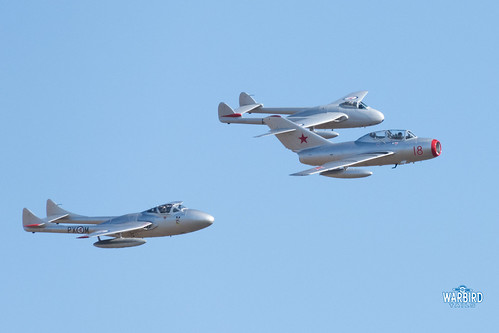 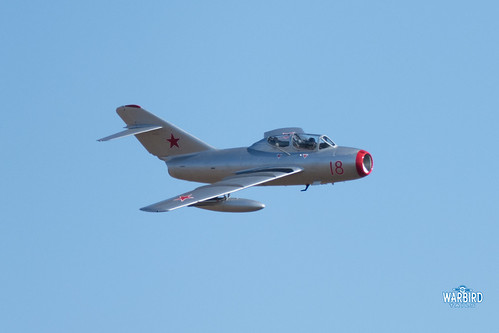 As mentioned earlier, the Spitfire finale was something truly special. 14 Spitfires took to the sky and formed up into a big wing. The aircraft then performed three stunning passes across the airfield in formation before breaking off into a classic Duxford tail chase. I said much the same thing last year and stand by it today, there is nothing quite like a Duxford Spitfire tail chase, totally unique in the airshow world. This wonderful centrepiece of the show was brought to a fitting close with a graceful solo display from Brian Smith in Aero Legends’ Spitfire TD314. 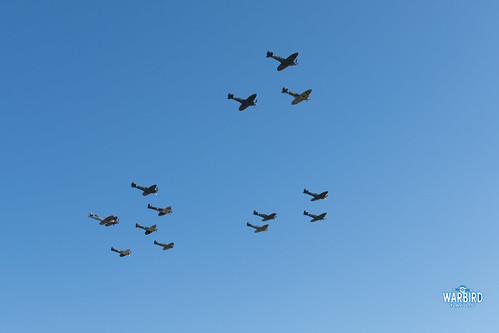 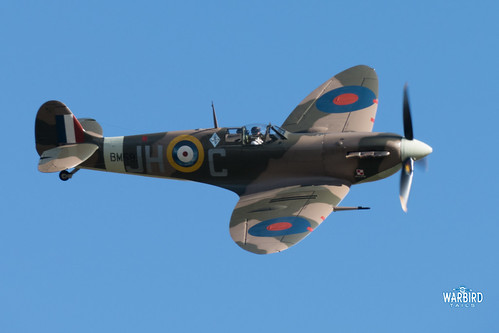 A real return to form then, for a venue which certainly seemed very out of character back in May. The changes made to the crowd line has brought that Duxford magic back, combined with a stunning line-up and some world-class flying the Meet the Fighters show is a clear highlight of 2016.

One thought on “Duxford September Airshow 2016 – Meet the Fighters”