Welcome to the start of a new Warbird Tails series which will take a look at what might have been if certain aircraft that fought on the same side were ever pitted against each other in combat or were put against an aircraft from later in the development of flight. 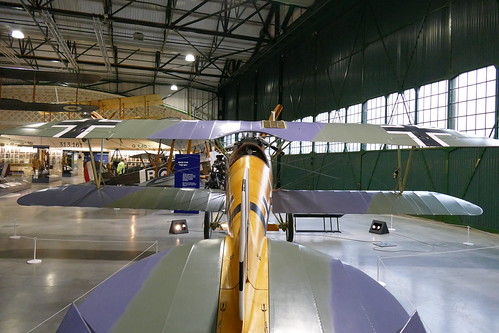 Throughout this series I will compare technical data regarding the aircraft combined with pilot accounts, both contemporary and where possible from the present day, this I hope will culminate in some interesting research for myself and reading for you. 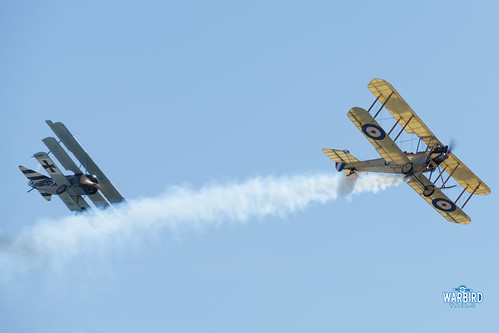 This first post asks the question of what if the British government had taken Anthony Fokker up on his offer of building them military aeroplanes ahead of the First World War and the icon that was the DR.1 formed part of the Royal Flying Corp’s fleet during the latter part of the conflict. I’ve chosen the Albatros D.Va as the likely opponent for this what if as that design presented the main scout not built by Fokker on the German side.

First, lets take a look at the design and development of these aircraft, the Albatros D.Va came from a long line of steady developments following the same basic principle. The Albatros design first broke cover in the summer months of 1916, with the D.I, based on a pre-war racing design. From the start the Albatros scouts stood out from the crowd. While a familiar biplane format they featured a streamlined fuselage, which still looks modern to this day, not to mention the inclusion of an inline engine, which, in a world of rotary power was a new development.

The D.I would join the front in September 1916, though not before the D.II had already been completed, the D.II presented improved upward visibility with a lower upper wing and redesigned struts. These early Albatros designs quickly turned the tide of the air war with their increased speed giving an advantage over the Sopwith Strutters and FE2bs that the allies were flying at the time.

The D.III arrived in early 1917 and this was when the Albatros gained that trademark sesquiplane arrangement, which greatly improved downward visibility, though it came as a cost. These new Albatros designs were found to have a design floor, the smaller lower wing would twist and turn in a high speed dive, not ideal for combat situations. The Red Baron – Manfred Von Richthofen, while famous for his all red triplane achieved many of his victories in the Albatros. The Baron himself fell victim of this design issue while engaged in combat with a FE8, his lower wing broke, though he managed to get the aircraft back on the ground. 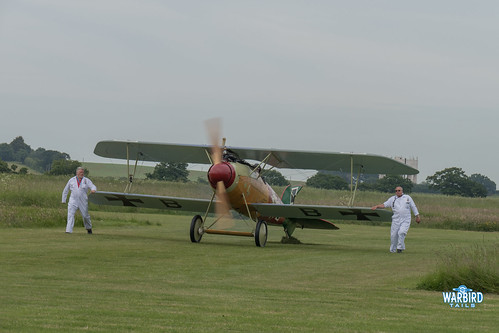 Albatros responded to these structural concerns by strengthening the wing bracing where possible, this resulted in the pilots becoming more confident with the aircraft and as a result it quickly regained the fierce reputation as a potent threat to the allies. 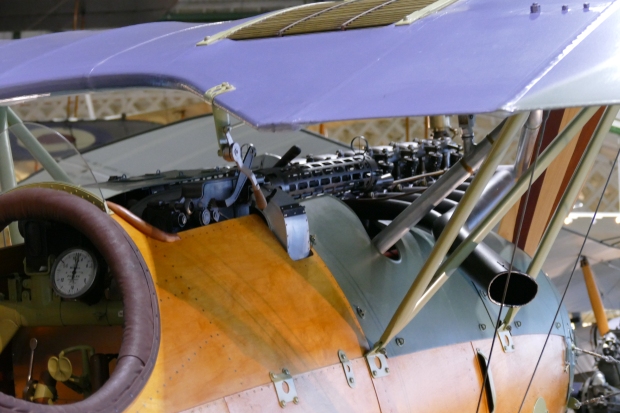 The D.V arrived in April 1917 and was quickly found to be history repeating itself. The new scout was billed as a lightened D.III, however it became apparent that making the airframe lighter had brought old problems to the fore again. Within a short while of delivery there were many reports of structural wing failures and calls for the project to be abandoned. It was only because of the Americans joining the war that the German government placed more orders for the new scout. 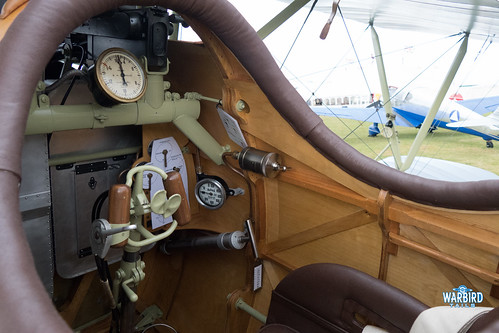 The D.Va first flew in April 1917 and was powered by a liquid cooled Mercedes D.IIIa which with its inline configuration was more of a move to the future than the rotary designs around at the time. The Mercedes engine provided 170hp which could pull the airframe to a top speed of 116mph and a climb rate of 821ft per minute. 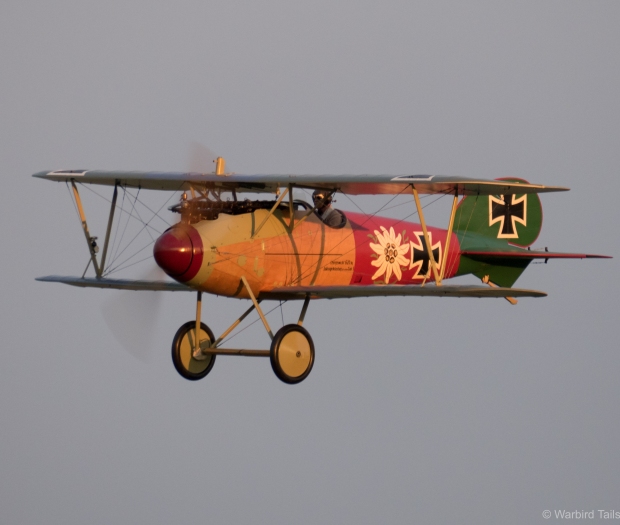 Many pilots of the time thought that the D.V was an obsolete fighter, presenting very little improvement over the D.III. Such was the nature of the First World War, aircraft design had moved on greatly in a short space of time, it would soon be the turn of Fokker to rule the skies again.

The Fokker Triplane on the other hand was something completely new. It goes without saying that the design was heavily influenced by the arrival of the Sopwith Triplane in 1916 and Fokker drew inspiration form the success the Sopwith machine had seen. The DRI first flew a few months later than the Albatros, in July 1917. Unlike the D.Va the Triplane was powered by an Oberursel rotary engine, producing 110hp giving a top speed of 115mph and a climb rate of 1,130ft per minute.

Two pre-production models of the Triplane, known as the F1 were sent to Jasta 10 and 11 in Belgium in August 1917. By the time September had begun the government were already being pressured by pilots to order more of the design as it had proved itself to be a powerful combat tool. Few design changes were required following the initial evaluation aside from the inclusion of wingtip skids to help with the Fokker’s challenging ground handling. 300 ordered were placed for the Triplane by the end of October. 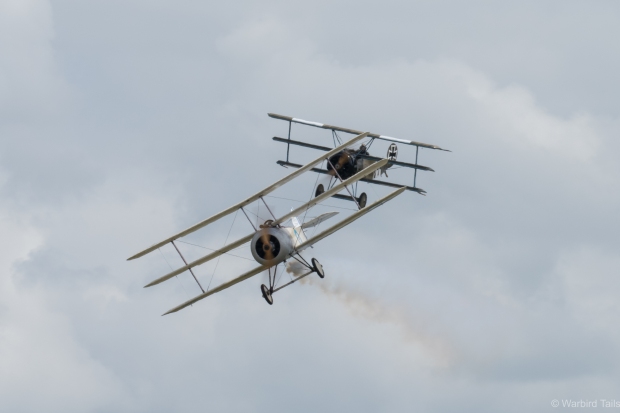 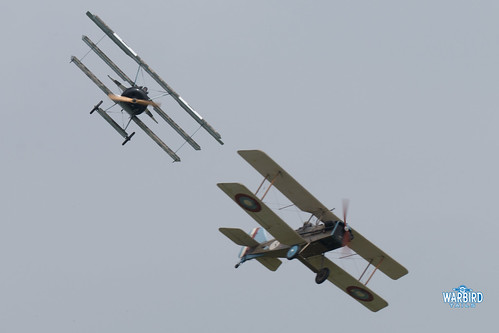 The rotary engine was coming to the end of its lifespan by 1918 and with ever increasing altitude in dog-fighting the Oberursel was found to be lacking and there were a series of engine failures during the summer months of 1918. 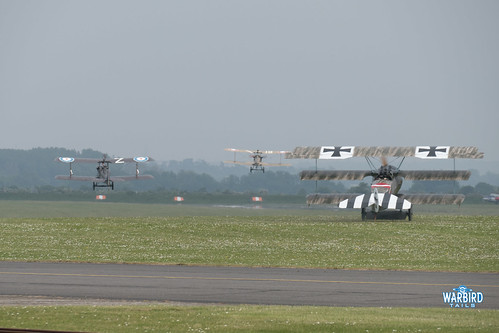 A limitation of this famous design was the wings, just like the Albatros had experienced there were a series of structural failures with the Triplane in which it would shed a wing. Inspections followed and a recurring design problem was found with the wing construction, this led to all Fokker DR.1s being grounded from the 2nd November. This would have been a big blow for the latest fighter. Fokker attempted to rectify the issue and the Triplane was back in service by the end of the month, however there were still reported cases of wing failure after this strengthening work had been completed. These problems were found in post war analysis to be inherent to the design rather than poor workmanship, the upper wing generated over twice the lift at high speed, which would account for the tendency for that wing to depart the aircraft in a dive.

One figure that immediately jumps up from the above brief technical description is the clear advantage the Triplane had in rate of climb, not a surprise given the extra lift the three wings would generate (there was also a small wing fitted between the wheels which provided extra lift). In terms of speed these two designs were very closely matched with the Albatros’ more streamlined design only resulting in an extra 1mph. The DR1 could also reach a higher ceiling than the Albatros with the Fokker able to break the 20,000ft mark. 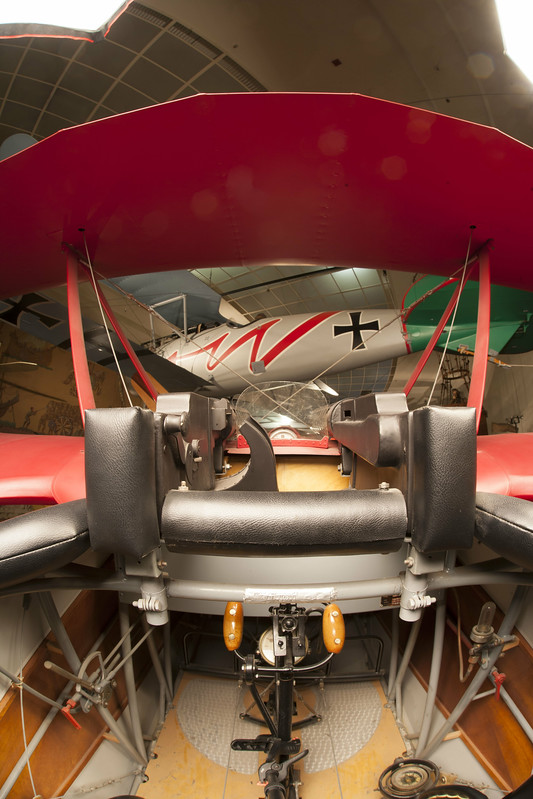 The above paragraph gives a simple “on paper” comparison of the two types, in which it could be argued that the Fokker had the edge but it is clear from the story of both types development that they experienced many of the same flaws, each was both ahead of its time and one step behind at the exact same time. (The picture above is from the San Diego Air and Space Museum archive showing the cockpit of their DR1, with an Albatros D.Va in the sights.)

The Albatros was known to be unstable in flight, with Josef Jacobs remarking as such during his early flights on the time. The aircraft is not particularly well balanced in the air and suffers from heavy ailerons leading to a slow rate of roll, not ideal for combat, especially when compared to the highly manoeuvrable Triplane. The pilot of an Albatros would have the advantage of a more reliable engine design however, the Mercedes up front needed little monitoring in flight and responded well to throttle inputs. Rotary power plants, on the other hand required constant adjustment and attention to simply stay running. This would have certainly taken some of the pilots concentration away from the matter at hand. 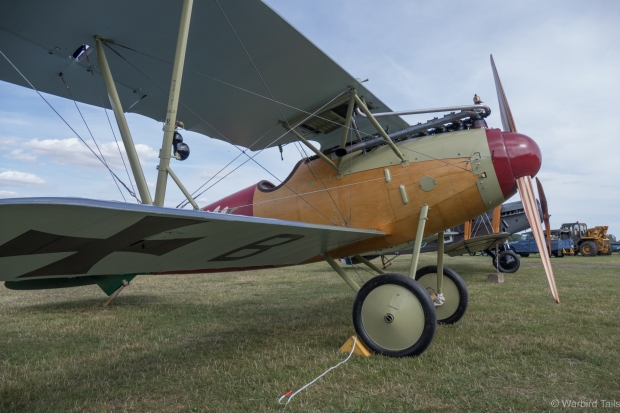 The Triplane was highly manoeuvrable,so much so that Von Richthofen commented that the DR1 “Climbed like a monkey and manoeuvred like the devil.” This can be seen today at airshows with a  number of pilots still carrying out impressive aerobatic performances in the aircraft, however, like the Sopwith Camel the rotary engine would prove problematic and make the DR1 an aeroplane to be treated with respect. Triplanes also suffer form the “venetian blind” effect while on the ground and visibility in the air would be limited by the middle wing also. 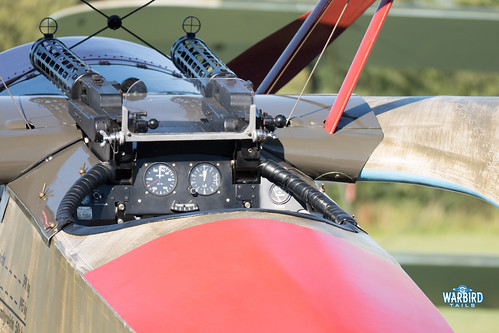 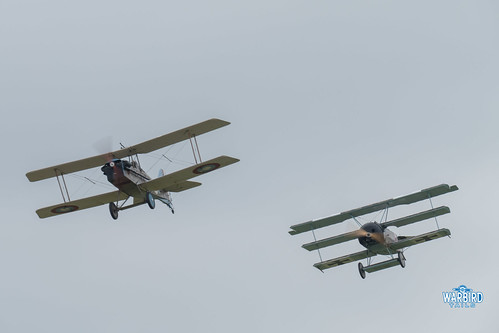 Fokker wanted to create the ultimate dogfighting machine with the Triplane, standing alongside one of the modern day replicas certainly give that impression. The Sopwith Triplane has certain elements that suggest an element of compromise and control, the slightly increased wingspan and generally more traditional picture. The Fokker on the other hand is a stubby design with short wings, large control surfaces and the impressive feat of unbraced wings, give off an air of power alongside instability. Pilots brave enough soon found the Triplane to be unbeatable in some areas, it could perform tight turns and loops with which nothing could keep up with, though liberal use of rudder was required to keep everything under control.

The Albatros D.Va may appear on the face of it the clearest demonstration of the future of aviation alongside the DRI, after all it features a more reliable inline engine allowing the pilot to focus on flying the aeroplane. In reality though the D.Va presented very little change from the D.III and represented the Albatros design’s last outing of note. The Fokker on the other hand, though using an unusual configuration and less practical engine featured the cantilever wing design that would go on to help create the greatest fighter of the war, the Fokker D.VII.

But what about the hypothetical question? Had these two aircraft met each other in combat which would have had the advantage. I think, based on all that has been examined above, the Triplane would have just taken the edge. Having that much lift and agility available would have made for a strong contender in a dogfight, especially taking into account the Albatros’ slow rate of roll even if the pilot of the latter would have benefited from less engine based distractions and a clearer field of vision. Both pilots would of course have been cautious of the structural defects which plagued the wings of both designs and the fighting style would no doubt have reflected this. 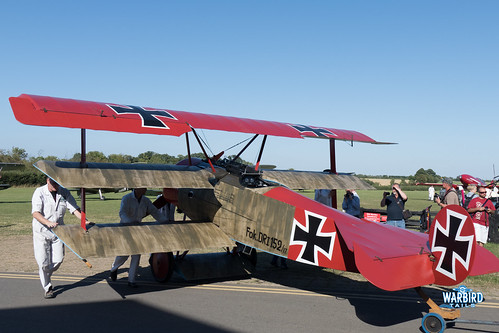 It makes for an interesting conclusion that perhaps a perfect aircraft would have been the reliability of an inline engine, combined with the agility and precision of the Triplane and the clear field of vision a biplane provided. When those perfect qualities are laid out like that it is easy to see how the Fokker company arrived at the revolutionary D.VII.