This month’s “Warbird People” sees me speak with Ed Vesely, the Commemorative Air Force’s (CAF) Helldiver pilot, a self-described “caretaker of history” who takes on the responsibility of flying this unique airframe and keeping history alive telling the important stories of the veterans that flew the SB2C. 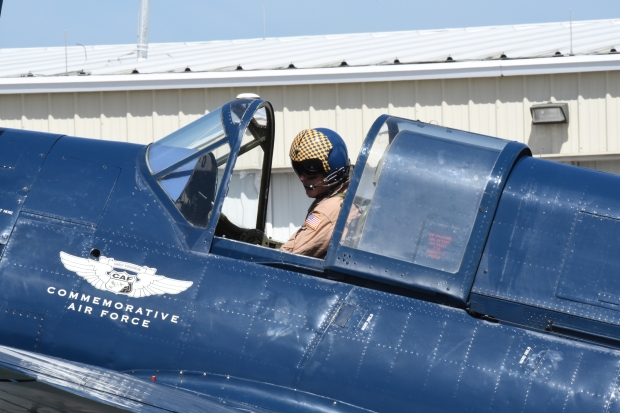 Curtiss aircraft throughout the company’s history maintained that constant reputation of the underdog and the unsung hero’s of the war in many theatres. One example of that familiar story comes in the form of the impressive SB2C Helldiver.

The Helldiver was a purpose-built dive-bomber with an internal bomb store and bomb-bay along with huge split flaps/dive brakes. Today only four complete examples of the type survive and only one is maintained in flying condition. That example is operated by the Commemorative Air Force and is usually flown by Ed Vesely. Ed has been flying for over four decades now and has been flying the Helldiver for over 12 years.

The first thing I asked Ed was if the Helldiver’s poor reputation from its early days was justified. He was quick to correct the story, pointing out that not only were the first examples to see service were vastly underpowered compared to later models, they also had a far weaker tail construction. A weak structure surrounding the tail-hook is never going to be a recipe for success and early Helldivers suffered the predictable results. Like so many new types brought into service in desperate times much of the reputation came from nothing more than lack of experience and a change in pace. New naval aviators would have been graduating up from the SBD Dauntless. In terms of size and weight the Dauntless fits much more in the trainer category than the beastly Helldiver. Not to mention the fact that the Helldiver had the highest landing speed of any carrier based aircraft of the time. Many early training accidents would simply have been from a lack of adaptation to the heavier machine. Ed certainly has not found the Helldiver to be an underwhelming aircraft to operate in the modern environment.

This latest design from Curtiss was an impressive machine at the time. While carrying out the same role as the Dauntless a more fitting comparison in terms of scale would be the TBM Avenger. The Curtiss had a shorter wingspan and an operational weight up to 4,000lb less than that of the Avenger. Where the Helldiver really came into its own was performance. It could cruise up to 20 knots faster than the Avenger and was much more manoeuvrable. 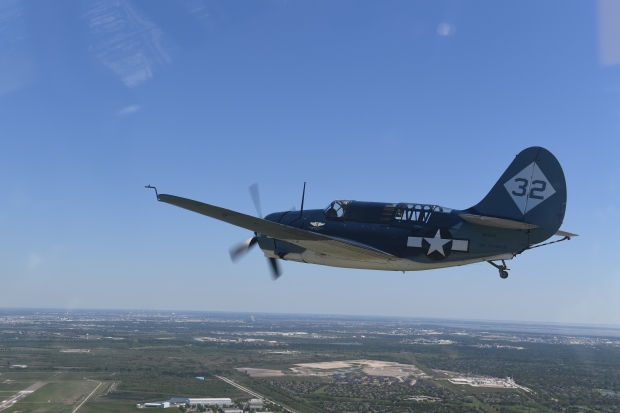 Operating an aircraft of this rarity and size in the modern day is a unique challenge that Ed and the CAF take on. Ed talked me through a typical flight in the Helldiver along with some of the challenges wartime pilots would have faced.

On take off, once lined up power is advanced to 2,800rpm, it is important to ensure that 7 degrees of right rudder trim is selected as with a 12ft diameter propellor running at that speed with 1,900hp, there is, unsurprisingly, a considerable amount of torque. This is not unusual for a high power piston warbird of course, though with a wider undercarriage swing is easier to manage so long as the aircraft is kept on the centreline. Flap is generally not selected as part of modern day operations due to the length of runway generally used, though this would have been used on carriers. 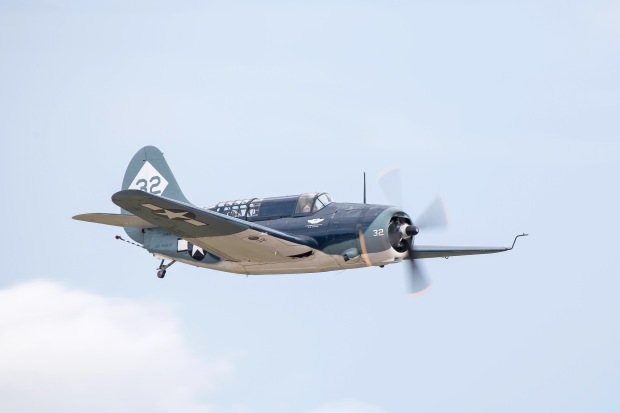 A carrier take-off would have been a very different challenge, a very short take off run available made for a different experience, even with a typical 35knot headwind. Footage of carrier operations from Helldivers clearly show how marginal these operations could be, pilots would always turn left as early as possible to get out of the carriers path in the event of engine failure. (As a side note, I had always thought that the aircraft at the back of a line up on a carrier deck had a distinct advantage having the whole deck available for take off. Ed corrected me on this, explaining that the stern was dedicated to landing aircraft and they were concerned that the island would provide too much turbulence, as a result the aircraft are always moved forward of the island ahead of take off.)

While there are no carrier operations as part of the modern life for this machine, it has been operated off grass on a few occasions at Virginia Beach and Geneso. The aircraft performs well at both sites but the ground has to be dry and firm as the small, hard rubber tailwheel can cause problems if there is any soft ground.

At the other end of the flight the Helldiver becomes a challenging machine, with gear and flaps down there is a huge amount of drag. The flaps do not provide any additional lift thanks to being part of the dive brake system, and the exposed wheel well even starts to generate drag once the gear is lowered. From the 170kt economic cruise speed the aeroplane is throttled back in the downwind leg to reduce speed to 110kt. Approaching touchdown the speed drops again down to 95 knots. At these low speeds the light ailerons become very sloppy which adds a further challenge to an approach. Both on take-off and landing the Helldiver it is essential to be lined up on runway centre line as the aircraft will always go in whichever direction the nose is pointed from the start. Once in motion it is almost impossible to get the aeroplane back straight down the runway.

These figures for circuit speed, along with the drag heavy configuration made carrier operations very difficult. Not only was there the challenge of getting the airframe lined up but pilots also had very few options to go around if they missed the wire on the deck. Low airspeed and lots of horsepower is a challenging combination. A go-around in the Helldiver is described by Ed as “Dicey”, the first challenge is adding power, then getting the flaps and gear back up due to the amount of drag they generate. This means that the procedure is to carefully apply power, retract the gear and slowly bring the flaps back up which will then allow the aircraft to accelerate and climb away. Until the flaps are up and a speed of 100kts is reached the Helldiver is “going nowhere”.

Being a dive-bomber, those impressive dive brakes are always going to come up in conversation. I knew from hearing previous interviews that these were prohibited from inflight use on the CAF Dauntless and was intrigued to know if the same applied for SB2C. Ed confirmed that while they are operational, using them in flight is too great a risk. They are far too effective and if they were to be stuck in the deployed position, there would be no recovering as it would be impossible to maintain altitude.

Flying the Helldiver in a modern-day environment as part of a touring operation such as the CAF means plenty of flying long-distance between display commitments. Ed confirmed that the Helldiver is a good aircraft for this sort of work, capable of cruising at around 170kt below 10,000ft. An impressive cruise performance for such a large aircraft. As part of any typical year Ed and the Helldiver can easily fly from coast to coast which is no mean feat at 80gal/hour of fuel and 1gal/hour of oil.

One avenue that helps keep the Helldiver flying is the popular rides program. For $995.00 you can have a flight experience sitting in the gunners position of the Helldiver out in the open air and get a first hand impression what it would have been like operating one of these machines during the pacific war.

We then moved on to discuss the path to strapping into this mighty naval warbird. Ed had previously flown similar types including the Hellcat and the TBM Avenger which provided a logical stepping stone to the Helldiver.

Ed describes the Helldiver in a display environment as handling very well. It has typically light ailerons, as would be expected from a Curtiss type, along with light elevators. The rudder, however, is much heavier, though this in-balance of controls is not uncommon for WW2 types.

There would be little point in keeping these historic airframes flying if there wasn’t still an important story to tell. Aeroplanes such as the Helldiver are quickly becoming the only living link to an important part of world history. The war in the Pacific was a theatre with unimaginable scale spanning over 5,000 miles, The CAF are currently telling this story with their “Prowlers of the Pacific” display featuring the Helldiver, a Corsair or SBD and a Zero/Kate depending on the venue. This display is choreographed to tell the story of the Pacific theatre. The act generally starts with a photo-pass, topside in formation before breaking into a combat scenario. This sees the Helldiver and Dauntless perform mock dive bombing runs as the Corsair and Zero/Kate dogfight.

I asked Ed what his personal highlight of flying the Helldiver and he quickly responded with getting checked out on the Navy Legacy flight. This is the US Navy equivalent of the Heritage Flight. This saw the Helldiver paired up with a US Navy F-18 (generally wearing a similar special scheme to the Helldiver). This display profile is flown at 210kts with the F-18 flying alongside with flaps locked halfway down resulting in a very stable flight profile for both aircraft. As part of this routine Ed took part in the 100th Anniversary of Naval Aviation Flight Exhibition at Oshkosh is 2011.

Since 2005 Ed has amassed around 400 hours in the Helldiver, having been one of the main pilots on the aircraft throughout its display and ride commitments. Another pilot, John Cotter, is in training for the next airshow season and will follow the familiar pattern of T6 and T28 before graduating up to the Helldiver with ground school and cockpit familiarisation.

When not flying the Helldiver Ed works at a jet aircraft brokerage firm, Welsch Aviation. His flying also includes his own J-3 Cub, A36 Bonanza and The CAF’s B-17 Texas Raiders. Ed shared with me an incredible entry in his logbook which saw him fly the J-3, T-6 and Helldiver all on the same day, quite an impressive days work!

To bring our conversation to a close I asked Ed to sum up what it means to fly the Helldiver:

“An Honour, a Privilege and a Responsibility.”

I’d like to thank Ed for his time in producing this post along with James B Robinson of the CAF for providing the wonderful photographs accompanying this piece. All photographs come courtesy of Ed and James unless otherwise credited. Further information about the Helldiver can be found at teams Facebook page: https://www.facebook.com/sb2chelldiver/.