As the airshow season in the UK fast approaches, I wanted to feature some of the heavier warbird types for a change. Over the past couple of years this site has had a strong focus on WW1 and WW2 fighters with less of an emphasis on the bombers and transport types.

This post marks a notable change in the programming with another Warbird People. This time the feature is again from across the Atlantic and again features the Commemorative Air Force (CAF) (much like the Helldiver feature in 2018). I’d like to thank Al Herum at the B-29/B-24 squadron for his time in assisting me with this piece. Al also kindly allowed me to use some of the sqaudron’s photographs from their Facebook page. These shots are combined with my own from my flight in Diamond Lil back in 2014. 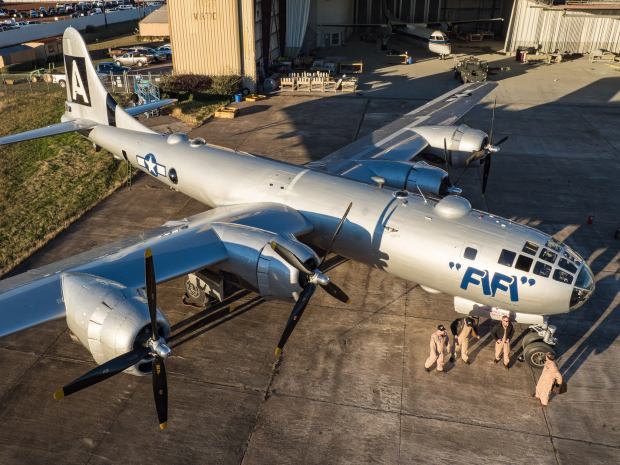 For those of you unfamiliar with the CAF and how they ensure their aircraft keep flying, here is a brief outline. Alongside airshow demonstration flights these airframes largely earn their keep through touring the country between shows and offering public pleasure flights both at standalone visits and before after airshows. (Full details of the 2019 dates, which includes over 25 differnt locations can be found on the squadron’s website here).  I was lucky enough to take a flight in the squadron’s B-24 Diamond Lil back in 2014 and the WW2 Weekend in Reading. The team run a slick operation and made the experience every bit as incredible as you would expect. Having had many years of Dragon Rapides and Tiger Moths carrying out pleasure flight duties at Duxford over the years, the sight of a B-24, B-17 and B-25 performing multiple flights pre and post show was certainly a unique experience.

As you could well imagine, operating four engine bombers of this vintage does not come without incredible challenges from not only a flying and maintenance point of view but also operationally and logistically. This is very important work as “the ride program is the key to the success of the squadron and the reason these bombers fly”. Ride events are generally preferred to airshows for the majority of the season.

Al explained that in order to keep up with the busy schedule of the squadron (see below) they are constantly performing planning and maintenance all year round. Typically the tour season runs from May through to October, not unlike the UK airshow season. However they do run a couple of events in March and April.

The squadron’s two main aircraft, unsurprisingly are the B-24 Diamond Lil and B-29 FiFi. For many years both machines were unique in the skies and it is only in the last year or two that a second B-29 has returned to the skies. These two designs span the full length of WW2 and represent very different technologies. The B-24 is a 1930s design while the B-29 makes great use of electronics, together with the inclusion of a pressurised cabin.

Boeing B-29A Superfortress 44-62070/N529B “FiFi” rolled off the production line in 1945, largely serving as an administration aircraft before being put into storage in the desert for a brief period before returning to the skies again until 1958. At the end of its second flying life, the airframe was retired to the US Navy weapons centre together with another 35 B-29s. After a long period of outside storage, the aircraft was acquired by the CAF in 1971 and flew to their Texas base in August of that year.

The resurrection of this machine to ferry flight standard only took an impressive 9 weeks, especially impressive given that the ferry flight was over six hours. By the 1980s the airframe acquired its civilian registration. Since joining the CAF FiFi has been a regular airshow performer and carried out countless pleasure flights over the years. The aircraft recently came out of a re-spray to refresh the familiar colour scheme and is now ready to be part of the tour this year (dates within this article). 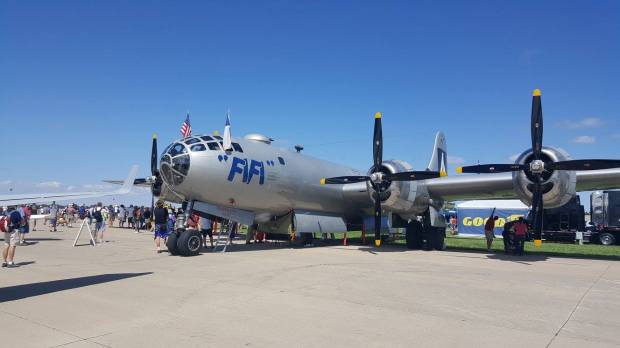 The squadron’s other bomber is Consolidated B-24A was the 25th B-24 airframe of the production line allocated to the UK initially as AM927. Quickly diverted to Trans World Airlines, 927 was used to train RAF pilots in the United States. After a landing accident in 1941 the airframe was converted into the prototype C-87 Liberator Express, returning to active service in July 1942. Throughout World War 2 ‘927 was used to ferry personnel between B-24 production plants and develop improvements for later model examples of the type. In 1948 the aircraft was sold to the Continental Can Company who outfitted the interior for executive use for their staff.

Another move came in 1959 when the B-24 moved across the border to Mexico. When the time came for an upgrade in 1968 the Liberator was initially loaned to the CAF before they eventually took over full ownership later in the year. In 1972 a change in paintscheme saw the name “Diamond Lil” added to the airframe, a scheme that was worn until the mid-2000s. During the 1990s the squadron visited the UK with the B-24 appearing at many shows at the time.

After a short period painted as “Ol’ 927”, the “Diamond Lil” name reappeared in 2012. Like “FiFi”, “Diamond Lil” has been a regular presence on the US airshow and tour scene for years now, aside from occasional periods of downtime for maintenance.

Though there is clear progression in technology between the two types, Al confirmed that they “are still very similar in many regards and very different from present day aircraft”. He notes that operationally they are both very similar. He continued to explain that “the B-29 flies a bit better than the B-24, though each has certain quirks”.

Expanding, Al explained that with “FiFi” care has to be taken as pitch is very limited on take off. This is due to the fuselage length and relatively short landing gear, which makes a tail strike a real concern. This explains the inclusion of the tailskid on the B-29. Ground handling is also tricky for both types as neither benefit from nose wheel steering, meaning that differential brakes and powers have to be used.

Al also talked me through a typical ride flight, in comparison to an airshow performance. For a ride flight proceedings start with a passenger briefing and boarding, before the crew go through their start-up and run up procedure. Once airborne it is a case of a cruise around the local area with some gentle turns to allow the passengers to get a feel for these old machines. The flight itself lasts around 30 minutes though the entire experience can last up to an hour. 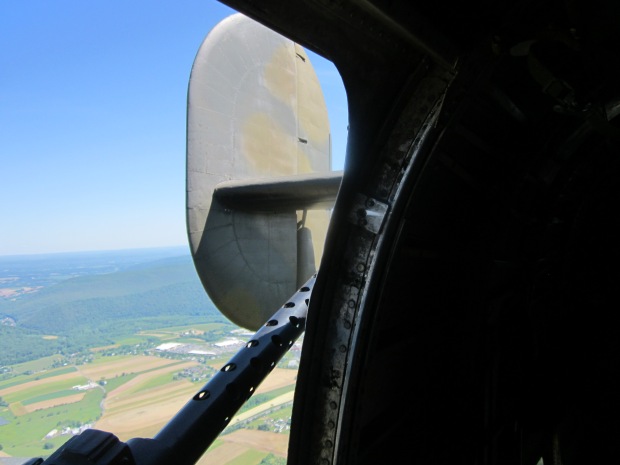 Airshow flights are of course carried out with essential crew only and last less than 20 minutes. A typical routine will involve “some low altitude passes and manoeuvring. The routines themselves are designed to minimise stress on these historic and valuable aircraft.

Reducing stress on not only the airframes, but the engines is vitally important to the ongoing success of the squadron. Compared to wartime operations these machines are flown at far lighter weights which also helps to reduce the strain.

The other key component of these multi-state tours are the transit flights. These can vary from “a few minutes to six hours” depending on the requirements.

The two machines work hard over a year, generally amassing around 150 hours across the season when factoring in transit, rides and training. When compared to European heavy warbirds this is certainly an impressive figure and such hours would be impractical without the financial support that the ride program provides. 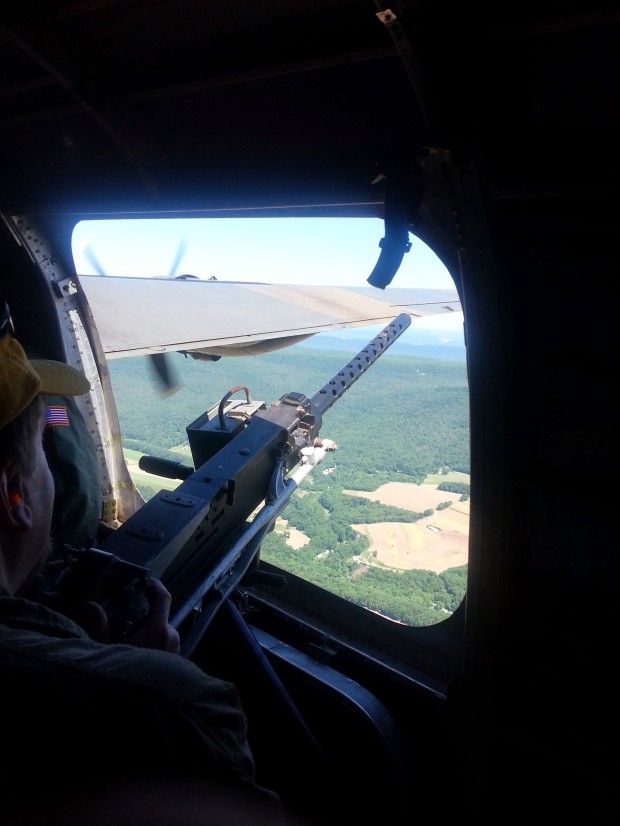 As I often end these conversations, I asked Al to put what operating these machines means into a few words:

“These unique, historic, priceless aircraft allow us to Educate, Inspire
& Honor those who built them and flew them in combat as well as those
that come to tour and ride with us”

The 2019 Airpower History Tour will be visiting over 20 locations, full details of which can be found here. Why not follow the bombers and the squadron by heading over the the squadron’s Facebook and Twitter pages.