A new event in the Shuttleworth calendar for 2019, taking the regular Fly Navy slot of the past few years, the Flying Festival was set to bring a family airshow with a real mix of rare historic machines together with a wide variety of other acts. The headline act for the majority was the Red Arrows, though for plenty of enthusiasts enjoying the “Uncovered” static park in the morning, the sight of seven Douglas C-47s/DC-3s announced last minute on the Friday before the show was the real shining light. 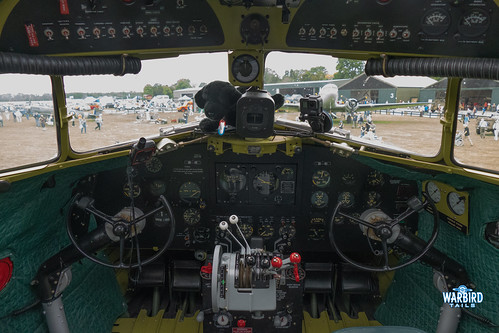 The excitement online was incredible on Friday morning when this special visit was announced. It seemed that the whole aviation community has been watching with interest as the D-Day squadron of 15 Dakotas made their way across the Atlantic over the past couple of weeks, culminating with arrivals at Duxford early last week. 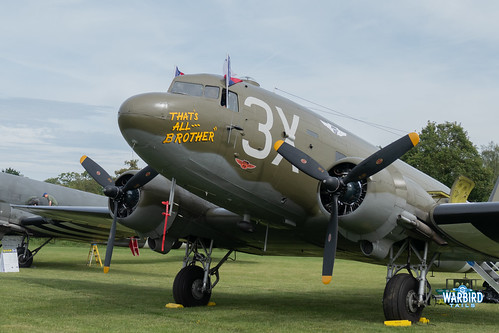 Early indications suggested as many as nine or ten aircraft would make it over, with six being available for close access. Saturday afternoon saw seven aircraft ultimately make the trip with their arrival looking incredible in the various images and footage online. 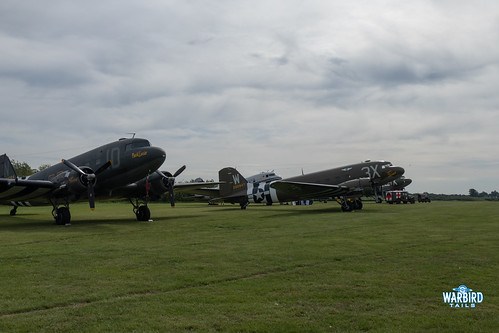 Driving into Old Warden early on Sunday on that familiar approach from the A1 it was utterly surreal to see a fleet of Dakotas almost looking like models on the Old Warden grass. Like many I sat and waited patiently for the static area to be opened up to explore the six airframes on show. The opening of the static was delayed a little, with good reason. The 7th aircraft “The Spirit of Benovia”, a modified example finished in VIP fit, taxied down from the far end of the airfield to join in on the uncovered display. 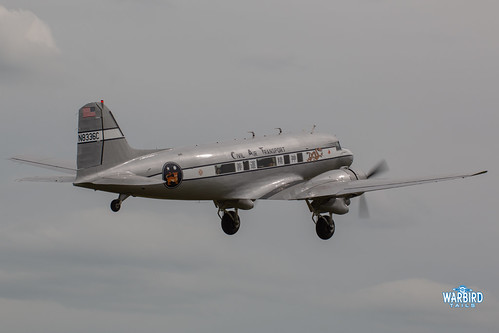 Wandering around these mighty machines in the confines of Old Warden was simply incredible. It was easy to tell that everyone on site was walking around a little bemused that this was actually happening. The American crews were all with their aircraft and more than happy to chat about flying across the Atlantic and landing at Old Warden. A number were open for inspection. I sampled one passenger fit and one C-47 in the form of the Historic Flight Foundation’s Pan Am machine and the Commemorative Air Force’s “That’s All Brother”. The latter has recently undergone a full restoration and is an immaculate tribute to the D-Day flight 75 years ago, finished to an incredible standard. 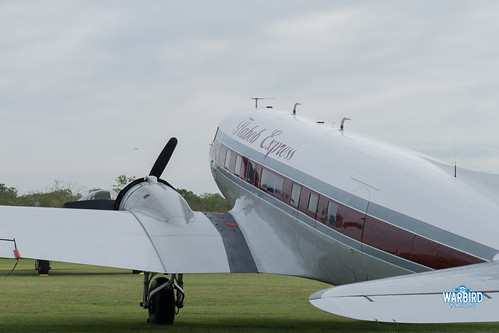 It should be noted that even without the show-stopping Dakota line-up, this show had a great collection of types. The opening sequence, a real classic Shuttleworth feature, saw four classic racers together for the first time. Following the DH88 Comet into the air were the Collection and David Beale Mew Gulls and the wonderful Hawk Speed Six. The four racers formed up behind the crowd with a great sense of anticipation for this first time formation. 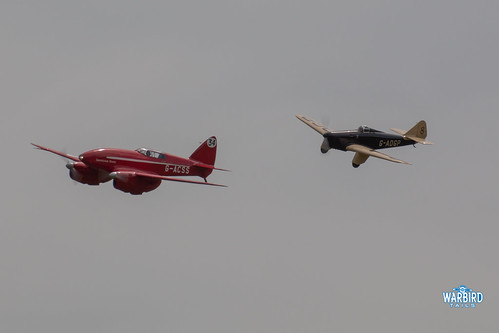 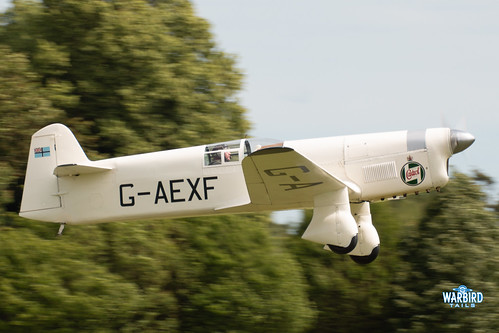 Though the four racers only performed one pass together, the four airframes put together a stunning 20 minute sequence. I’ll never tire of watching two Mew Gulls chase each other around the sky and to be followed by Hawk Speed Six and Comet solos is really something else! 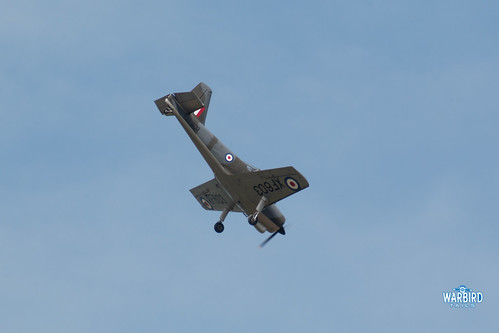 A nice trainers segment followed with a graceful Harvard solo giving way to the collection’s Piston Provost, later there was a lovely de Havilland trio comprising of two DH60 Moths and the elegant DH51. 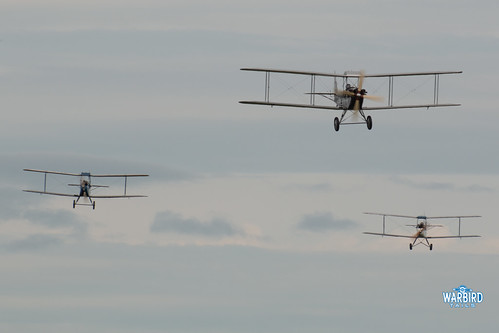 Rotary wing types were well represented with a pair from the Gazelle team and an energetic solo performance from the Westland Wasp. 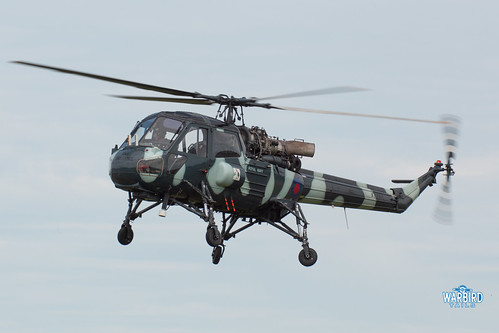 Old Warden is about vintage machines of course and I believe that the pairs routine from the BAE System’s Anson and Bristol Blenheim is right up there with the finest routines the venue has seen. Two striking passes round the Old Warden bend gave way to a graceful tail chase before each machine broke off into solo displays. It is always a treat to see the Blenheim at Old Warden and this was nicely complimented by the other Mercuries on the line up in the Lysander and Gladiator. 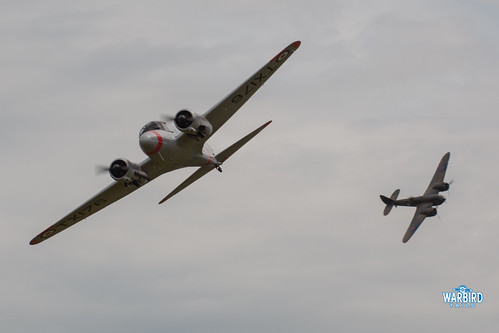 The aforementioned Dakota formation were the focal point of the afternoon’s flying. Though not part of the flying display as such, it was always going to be hard for the sight of seven Dakotas taxiing out and departing in stream tube anything other than a highlight. 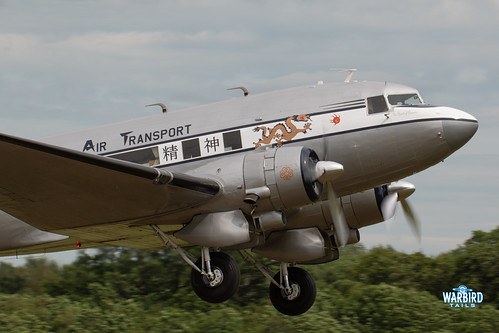 Led off by Placid Lassie, the seven machines thundered down the grass runway and lept off into the air, forming into smaller formations as they headed back to Duxford ahead of the festivities both at Duxford and France later in the week. A wonderful chapter in Old Warden’s long and varied airshow history. 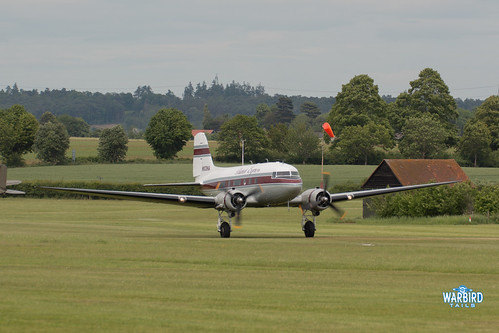 A refreshing act in the flying programme was a regular Old Warden visitor. The Fairchild Argus is often seen at fly in events around the country but this season has seen it join flying line ups. This rare machine performed a graceful display and has great presence as an airshow performer. 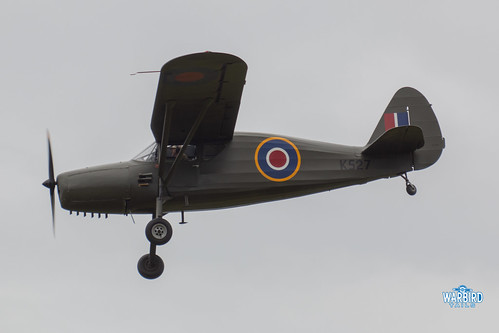 Prior to the Dakota announcement, the high point in the flying programme, for the wider public at least, would have been the Red Arrows. The Reds displayed as part of their first weekend of the 2019 season. UK appearances will be rare this year as the team depart for an American tour in July. 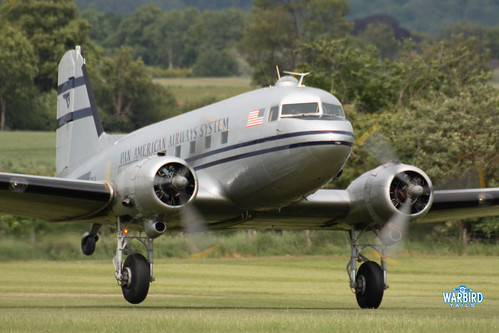 The flying programme was brought to a close in typical Old Warden style with a pairing of Gladiator and Spitfire. 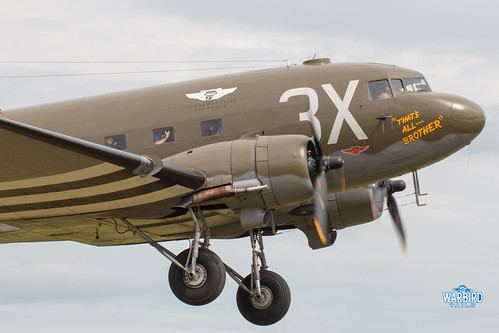 Picking up where the Season Premiere left off, the Flying Festival proved the concept of this new show well and made for an enjoyable afternoon in the company of some wonderful aeroplanes.