After the excitement of the D-Day squadron’s Old Warden visit, the next event on the diary was a mid-week show (that could catch on!) at Duxford. There appears to be plenty of controversy around the events that followed in France online at the moment. This post is simply to account for what was, all of that aside, a simply extraordinary day at Duxford that sits among my favourites. 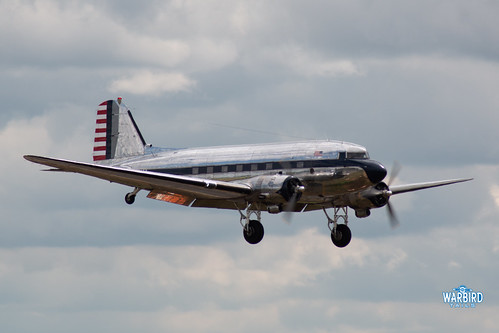 Arriving on the airfield early on Wednesday morning the impressive sight of DC-3s/C-47s sprawling across Duxford’s grass runway greeted us. What was even more impressive was that five of those gathered were already in Normandy for a morning parachute drop, set to return later. Duxford already looked full, even with not far of 25% of the fleet missing! Not long after gates opened six aircraft were firing up and taxiing out for a formation flight with Classic Wings operated Harvards. With a relatively unknown schedule it was great to get some additional flights before the planned mass departure. 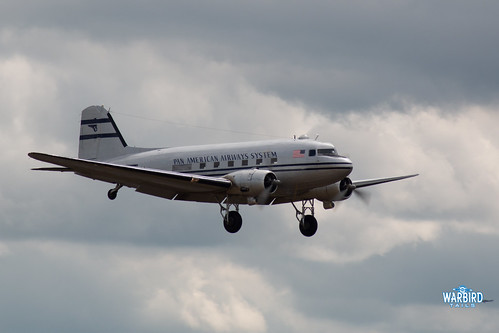 Up next was a remarkable flypast from the USAF out of Mildenhal. Having never really seen a V22 fly previously, the sight of multiple examples in formation with a number of C-130 Hercules was simply incredible. A wonderful tribute from the modern day forces. 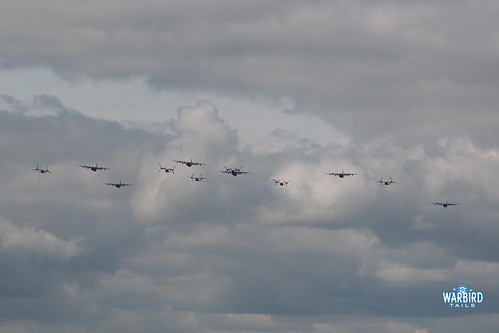 After the disappointing news that due to airspace restrictions, the mass-departure had been pushed back, the five airframes that had flown out to France returned in formation for recovery and refuelling before the big flight later on. 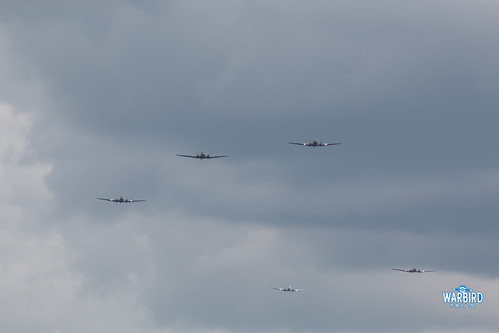 A low key aspect of the pre-show advertising was the flying display that was included. While the Daks were the main attraction the organisers had gone to great lengths to get some classic Duxford flying displays to compliment things perfectly. 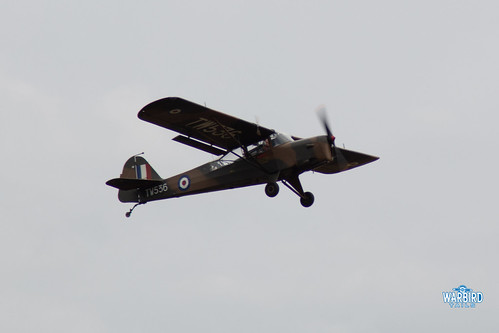 Two Austers flew a graceful routine to pay tribute to the part played by the “L-Birds” over Normandy. 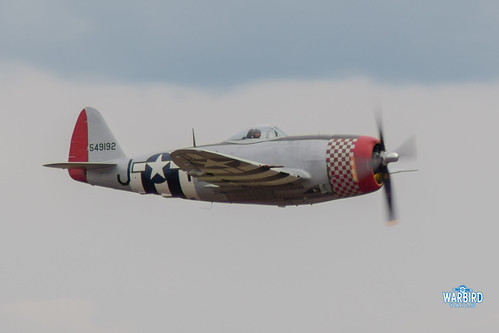 This was before the airspace was given to a real D-Day icon, the P-47 Thunderbolt. In the hands of Paul Bohnhomme, “Nellie B” was flown through an extended aerobatic sequence which never ceases to amaze. Watching this big airframe seemingly drag itself through aerobatic figures, only to be shocked by the impressive pace once it passes at low level. The final slow motion wing rock across the Duxford grass was a wonderful way to close off an appearance from this rare fighter. 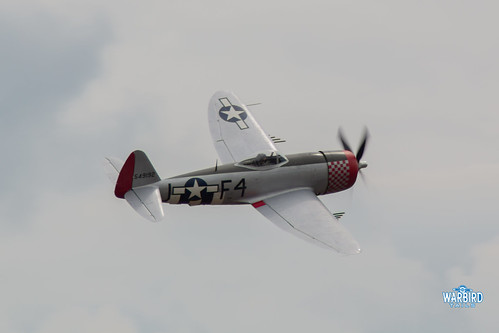 What followed was a sublime account of the Fighter Collection’s Wildcat in the hands of Stu Goldspink. This really felt like one of those sequences you never wanted to end, echoing his masterclass Hurricane solos at Old Warden in recent years. It seemed as though the little Grumman fighter was never going to run out of energy, brilliant to see! 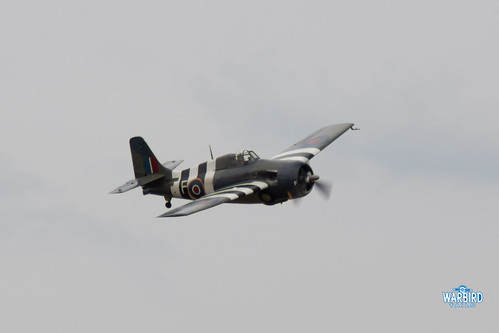 As if the calibre of the display flying had not been high enough, the bar was then well and truly raised again. Led by D-Day veteran ML407, a Spitfire pair, completed by MH434, flown by Richard Grace and Steve Jones, took to the overhead for a 20 minute display that will live long in the memory. Close formation does not really do justice to the sequence that followed and the airfield fell silent throughout this remarkable routine. 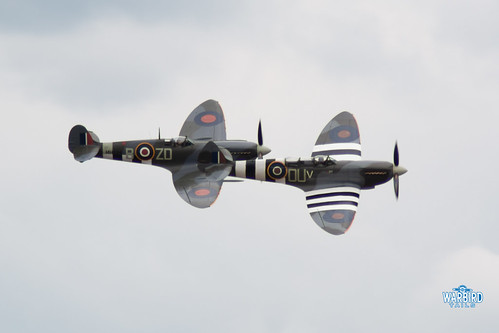 The flying display was brought to a close by a good old fashioned airfield beat up from the Mustang pair of the Shark and Miss Helen, both resplendent in D-Day Stripes. 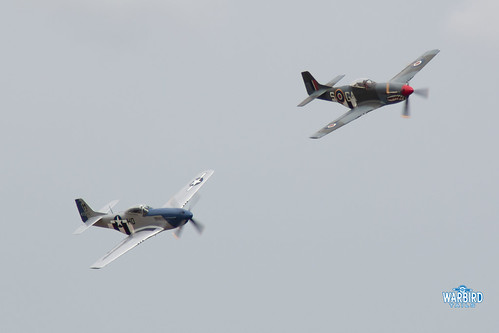 After a wonderful afternoon’s flying it was eventually time for the main event at around 4pm. This saw 21 Dakotas fire up and taxi out to the runway. I was not prepared for the incredible sound of that many aircraft starting and carrying out power checks before departure. 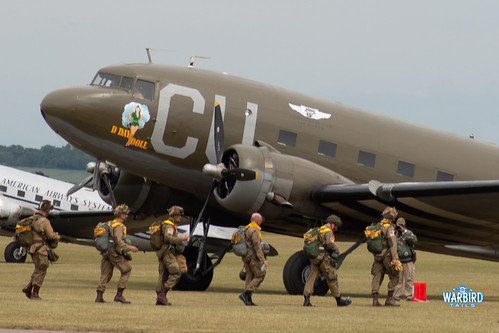 Nine examples took to the air before returning for a trail flypast across the airfield, while the remaining airframes got airborne and tracked behind the museum before heading off to the South. 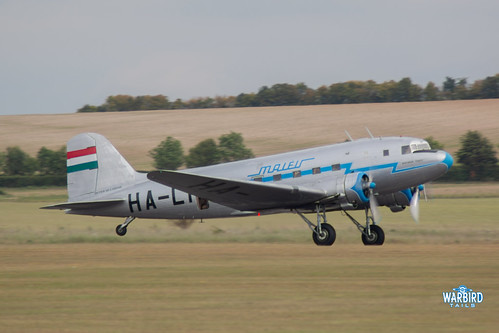 While many seemed to expect a mass formation, that was always highly unlikely, given the mix of DA requirements across the different nations involved. The formation really seemed to capture the nation with no doubt thousands out waiting to watch the flight pass overhead. 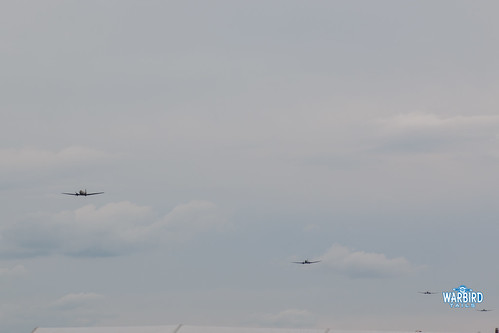 Regardless of the politics that may surround this event, I thoroughly enjoyed it and wager that we will never see the likes of this gathering again. The sight of all those airframes assembled and departing would have been worth the day out on its own, but combined with the high class flying display, it really was something special.