In a year that managed to deliver a handful of great flying displays, Duxford managed to deliver one more treat for enthusiasts. The Imperial War Museum hosted three “showcase days” this year, which allow visitors to enjoy an hour or two of based aircraft displaying as part of a normal museum day.

The early August event saw a full flying display take place, whilst the event later in the month was badly effected by strong winds, low cloud and rain. 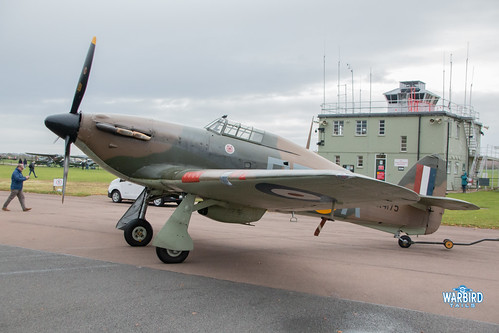 There were points where it looked like the October event might also suffer from early autumnal weather. Fortunately though, appropriate steps were taken to allow the flying to move earlier, into a longer slot.

A planned two hour display was condensed into a 90 minute single slot, scheduled to fit in just before some forecast rain and this really helped add to the airshow feeling, with a good stream of action throughout the display.

As with both August events I was struck by how “complete” an event this felt. The based operators had gone all out to show their aircraft to the public. Even those sitting 2020 out in the air, such as the Fighter Collection, put their machines out on display (On this occasion the Mk V Spitfire, Hawk 75 and Corsair).

The October event got underway with a solo display from an Extra 300. This was flown in a very graceful manner for a type so often thrown around in an unlimited style sequence, making for a welcome change.

The first of the warbirds in action on the day followed, with a radial engined tribute. This saw the based North American Harvard and Yale, led by the de Havilland Canada Beaver. This must have been a unique formation outside of North America and even then, I’d guess for some time. It’s always wonderful to see the Yale in action after so many years of inactivity and the Harvard and Beaver also put in graceful appearances.

In the first of two great nods to “classic” Duxford, we got to enjoy a trio of WW2 Fighters. This saw the Aircraft Restoration Company’s Hispano Buchon leading a pair of P-51 Mustangs.

Duxford based “Miss Helen” was joined by Sywell based “Contrary Mary”, providing the public debut display for the Air Leasing stable of warbirds in 2020. The three ship ran through together before a short Buchon solo gave way to the inevitable tailchase. With the Mustang’s victorious they flew a short pairs tailchase before breaking to land.

Peter Kaypurs, best known for his displays in B-17 Sally B in recent years, brought a unique machine to Duxford for this event, his Bell 47G Helicopter. Made famous from its role in Mash, this civilian scheme example flew a graceful display close in to the Duxford crowd.

Another unusual combination was a pairs routine from a pair of long-term Duxford twin residents. Mark Miller’s DH89 Dragon Rapide lead Plane Sailing’s Catalina around the display line in a wonderfully unique performance.

All too soon it was time for the grand finale. Duxford were unable to host their planned Battle of Britain tribute in September, so they put this showcase to good use.

This finale saw the three Duxford based Mk I Spitfires (Imperial War Museum’s N3200 and the Commanche Fighters pair) joined by Hurricane R4118 and G-HURI (resplendent in its new colour scheme) for a series of formation passes and an extended tailchase.

The tailchase gave way to a short but sweet solo aerobatic performance from Pete Kynsey in Spitfire I AR213. The final Spitfire touched down on the Duxford grass just as the heavens opened and heavy rain covered the airfield.

What a wonderful way to close out the shortened 2020 season!