The peaceful interwar years conjure up images of silver, shining biplanes looping and rolling their way through clear blue skies thrilling crowds of passers by below. 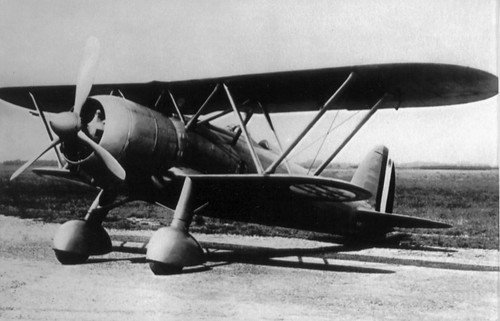 As war approached the biplane gradually started to be phased out. Modern monoplane designs were coming to the fore and it seemed inevitable that the biplane would soon be obsolete. In British skies only two biplane fighters were still involved in front line service as late as the Battle of Britain (later in other theatres). I’ve already written at length and on numerous occasions regarding the British Gloster Gladiator. This post takes a look at another late biplane, the Italian Fiat CR.42. 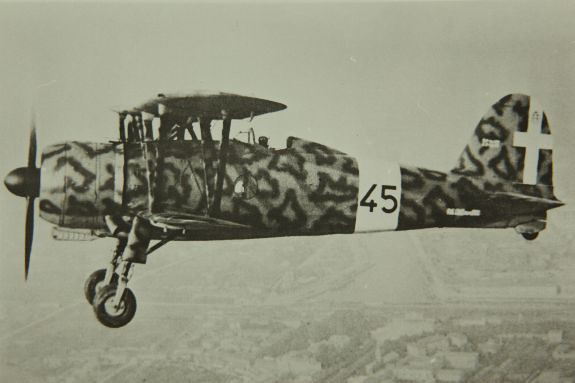 The two types tend to get grouped together, understandably as they were both very much fighters out of time by the start of the war and met in combat over the island of Malta. At first glance, you might expect the Gladiator to the be from a later era than the Fiat, thanks in part to the more modern enclosed cockpit. The truth, in fact, is that the Fiat took its first flight some four years later than the Gladiator. The CR.42 came from the earlier CR.32 which saw service in the Spanish Civil war. During this conflict it became apparent that the Fiat biplane design was in need of an upgrade. 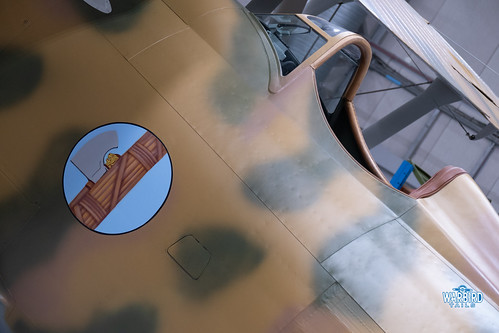 One key improvement over the earlier fighter was the move from inline to radial engine. The new Fiat A.74 840hp radial engine was chosen as the power plant for this new fighter. Under closer inspection, the Fiat is clearly from a different era to the Gladiator (effectively a “super” Gauntlet). The Fiat carries sleek lines and an unusual wing arrangement and paints a graceful picture of a between eras machine. Fiat’s generally wore spats on their undercarriage, a notable nod to aerodynamic design in pursuit of performance. In a throwback to some of the iconic WW1 fighters, the Fiat is a sesquiplane, with the bottom wing being notably smaller than the top. This unique design resulted in low wing loadings which made the airframe a joy to manoeuvre for pilots. 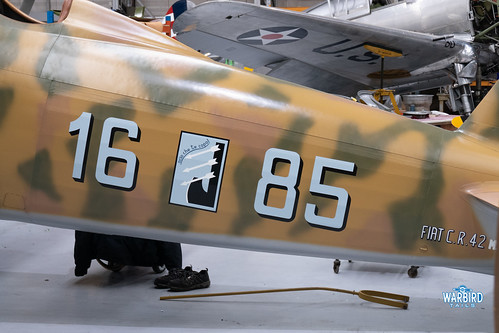 The Fiat is contstructed with welded triangular tube framework with the forward fuselage being metal covered as well. The rear fuselage is fabric covered and the wings are covered by moth materials with the same split. 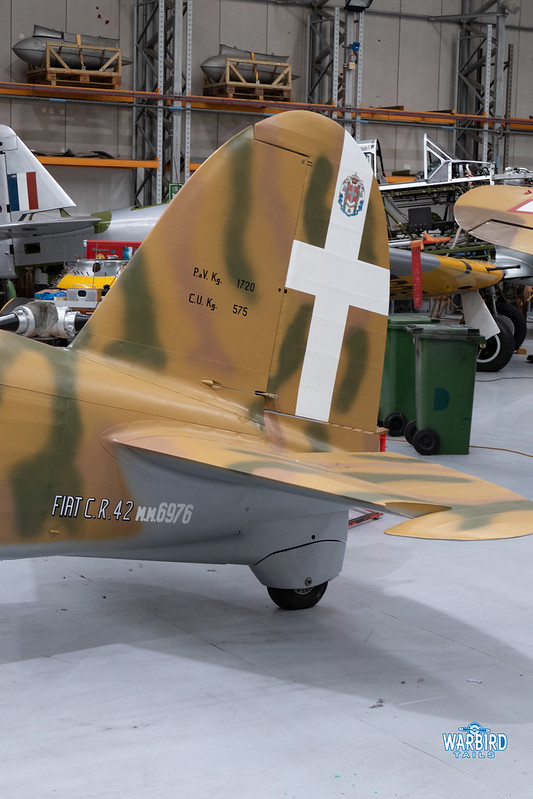 As part of the airframes initial development it was put up against other Italian designs of the day and came out on top. With war an unavoidable future, the Regia Aeronautica, ordered a batch of the new design. 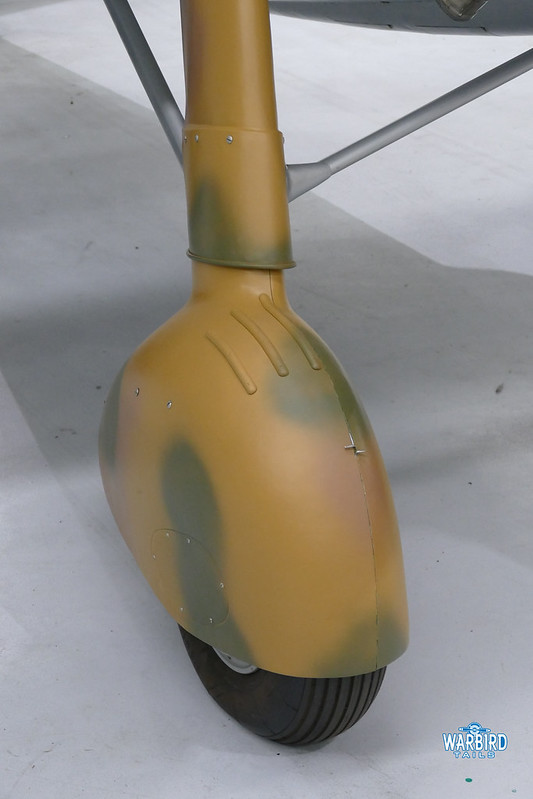 With the new design into production, it joined service in May 1939 at Turin Caselle airport. By June 1940 around 300 Fiats had been brought into service. In early service the italian fighters made the jounrey through France before arriving at now occupied bases in Belgium towards the end of the Battle of France. During October and November 1940 Fiats took part in missions over the eastern coast of England with very limited success, leading to one machine making a famous forced landing on a Suffolk beach (now on display in the RAF Museum at Hendon).

While the skies of Britain were clearly now a step too far for this later day biplane they were still trying to prove themselves over Malta. This saw the Fiat up against the Hurricane which initially proved challenging for British pilots as the Fiat was able to turn more tightly than the Hurricane. A Fiat did even claim a victory against one of the Hawker fighters during August 1940. Techniques were discussed and notes were compared and it was quickly decided that the diving, fast pass and climbing away method would best suit dealing with this agile machine.

The CR42 actually saw slightly greater success in the role of night fighter, surprising for an open cockpit biplane with no radar. The Fiat posed a surprising threat to British bombers in 1942.

Like many older designs the Fiat saw considerable service in North Africa, starting in 1940 and initially flew against contemporary designs such as the Hart and Gladiator along with Blenheim’s. It was in North Africa where the Gladiator, very much the British equivalent of the Fiat, cut its teeth in combat alongside the Italian design. Though on paper, the Fiat was the better performer, experience eventually concluded that the Gladiator had the edge.

In many ways key to the types modern day chances of revival was its export to the Swedish Air Force. The Swedish started with over 70 examples of the type but around 30 would ultimately be lost to technical problems and accidents. The Fiats had a troubled war in Sweden with pilots largely unimpressed by the slow performance in comparison to more modern day fighters, though like others found it surprisingly competent in a dog-fight. 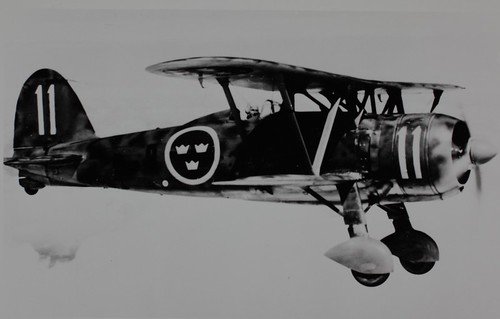 Out of all the 1,079 CR42s built during the 1930s and 40s, just four examples remain. Two examples were effectively preserved when they stopped flying and the other two are the results of impressive restoration work. 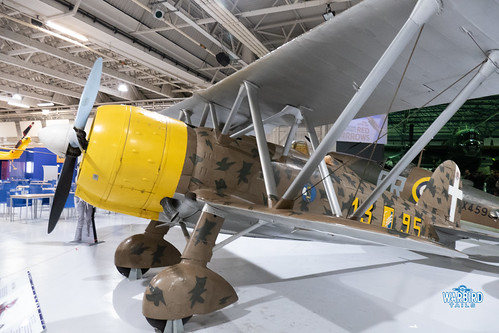 MM5701 at the Royal Air Force Museum Hendon is perhaps the most impressive example of the type and one of my favourite preserved WW2 aircraft. This is the machine that made a forced landing on the beach in Suffolk in November 1940. Following the accident it was pressed into test flying duties with the RAF, flying all manner of handling and comparison flights throughout 1941. Like many of the captured aircraft of the second world war, decades in storage followed before a public appearance at Biggin Hill in 1965. Restoration work followed in the intervening years and the museum took delivery of the airframe in 1978. It has long had a key position in the Battle of Britain Hall at Hendon but since the recent RAF100 project it now resides in the main historic hangars alongside the Spitfire, Hurricane and 109E.

The move did provide an excellent chance to enjoy an unclose look at the Falco in a dismantled state which was a real treat.

J 11 (Swedish designation) 2543 is on public display at the Swedish Air Force Museum. Another static example of composite construction is on display in Italy, painted as MM4653 having been put together from wrecks in Italy, France and Sweden. 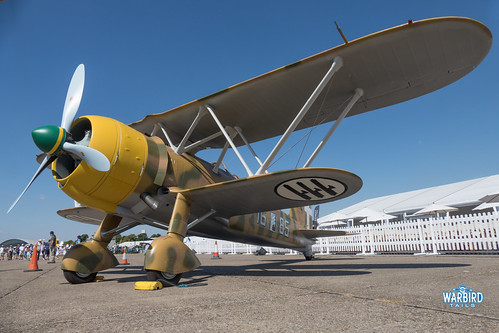 Perhaps the most exciting of all the surviving examples of the Falco is the Fighter Collection’s example. This machine is another Swedish built J11 number 2542. The airframe was lost in a training accident in April 1942. The airframe was bought but the Collection in 1995 with the completed fuselage eventually appearing at Duxford in the mid 2000s. The aircraft was eventually rigged in an uncovered state in 2013 before departing to Audely End for further restoration work. 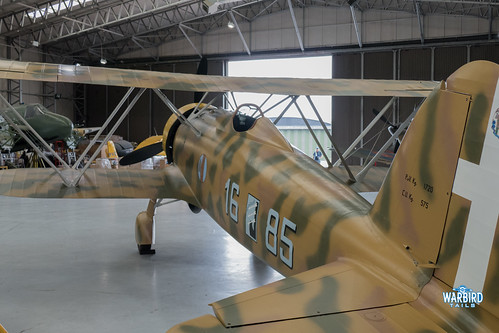 As a surprise to many in 2018, the Fiat returned to Duxford under covers and was assembled in the days proceeding Flying Legends that year and rolled out resplendent in its finished colour scheme. The Fiat looks simply incredible and it was a great surprise to see it so complete. As things stand the Fiat still needs a few key parts before it will be ready for engine runs and test flights. Nonetheless it is great to see this aircraft complete and on display at Duxford after many years in and out of Hangar 2. Hopefully it will not be too long before we can all enjoy the unique sight of a Fiat CR42 in the air. 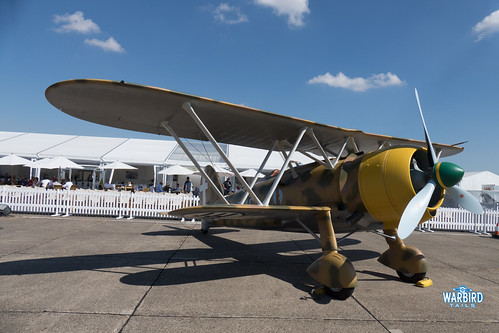 All archive images in this post are from the SDASM archives and linked appropriately.