Earlier this year it dawned on me that Warbird Tails would soon be racking up 300 posts – I thought the occasion certainly warranted some sort of celebration. I kicked around a few “300” themed ideas before ultimately concluding that there was one perfect answer; the Spitfire. The original Spitfire prototype was known as the Supermarine Type 300 and there is no more iconic an aircraft to feature on a special occasion.

The only challenge was that i’ve covered the Spitfire in quite a few of those 300 posts and I wanted to present something totally unique for my readers. Browsing through the aviation forums and Facebook pages, as I do, I was struck by the image of a Mk IX Spitfire resplendent in Invasion Stripes with a racing number where the roundel should be. Now that struck me as a great story to tell. 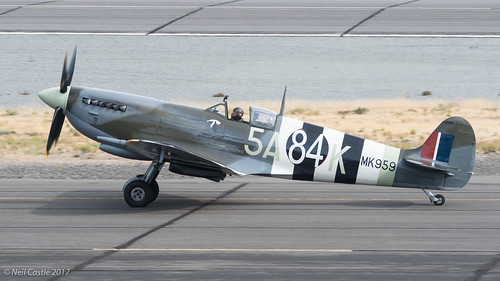 The Spitfire in question, MK959, most definitely earned those stripes, having flown as part of the D-Day operation as its final sortie of the second world war. The airframe is now part of the world renowned Texas Flying Legends Museum, well known for their spectacular mass-warbird sequences combining close formation flying and spectacular low passes with aerobatics.

I got in touch with the Museum and was lucky enough to be contacted by their chief pilot Warren Pietsch. Warren was kind enough to offer up his time for a chat about flying the Spitfire at Reno and a little background to operating a Spitfire in the United States.

Warren was clearly bitten by the aviation bug at an early age, he told me about painting a P-51 on his bedroom wall at just 10 years old and reading Battle of Britain books detailing the dramatic and brave exploits of aces such as Douglas Bader and Robert Stanford-Tuck. By 16 Warren was a pilot himself and has had an incredibly varied career since, including a stint based out of Manchester in 1989, during which he managed to visit a number of British museums. The Spitfire stuck in his mind from these visits, but he certainly didn’t imagine he’d one day be flying one. 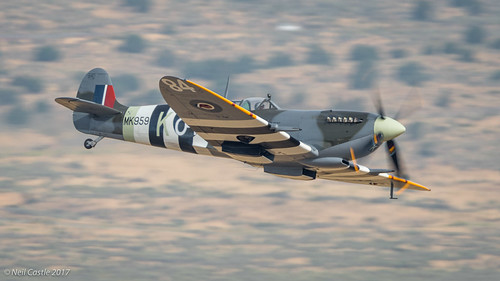 That day came in late 2015 when Warren headed up to New Jersey to take his first flight in the iconic fighter. After spending some time in the hangar learning the system Warren took the Spitfire up for a shakedown flight around the block to get to know the aircraft. He describes the Spitfire’s handing as great on the ground with an effective rudder for taxiing. That effective rudder comes in handy on take-off when it does a great job of controlling the torque swing. In the air compared to other aircraft of the era the tail controls are very effective while the ailerons could be better. During those early flights Warren got to know the stalling characteristics which he describes as straightforward.

One aspect of the museum’s operations that fascinates me is the sheer volume of miles they cover each year. Warren explained that they have flown the Spitifre coast to coast a few times over the years, so much so that since that first flight in 2015 he has now amassed over 200 hours in the fighter. I asked him what the Spitfire was like on long range flights as he is in the unique position of flying the aircraft in conditions similar to wartime sorties. Warren actually commented that he probably flies far longer sorties than would have been typical. In place of guns, MK959 is fitted with extra wing fuel tanks, given an all up fuel capacity of 132 gallons. This means on a cross country flight the Spitfire can be airborne for anything between two to three and a half hours depending on whether cruising with bombers of fighters. 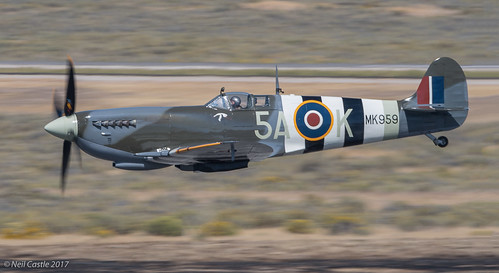 While not as straightforward as the Mustang for cross-country flights, unsurprising given the Mustang was designed for long-range escort missions, Warren comments that the Spitfire is comfortable. It lacks some stability in the cruise, with a sensitive tail thanks to the powerful control surfaces. The flight to Reno was a great example of this long-range flying, over the course of a single day and 7 hours flying Warren and the Spitfire covered 1,400 miles!

There are certain quirks in the Spitfire that certainly could be referred to as “character” such as the fact that after take off the pilot has to take a hand of the throttle, swap hands on the stick before using their other hand to retract the undercarriage which makes for an interesting challenge compared to the more straightforward ergonomics of the Mustang.

My first big question regarding the racing was how did the Spitfire get to Reno. Warren explained that Bernie Vasquez, (The museum’s Director of Maintenance) is a crew chief on Reno winning Mustang “Voodoo” and was approached by Voodoo’s owner to see if the Spitfire could be entered. With lower numbers than usual in the Unlimited class the race organisers were keen to have extra Warbirds and arranged to have the ‘Flying Legends six ship display (Spitfire, Mustang, Corsair, P-40, B25 and Avenger). The four fighters were all entered into the races, qualifying the week before. There was extensive ground school earlier in the year before the aircraft arrived at Reno. 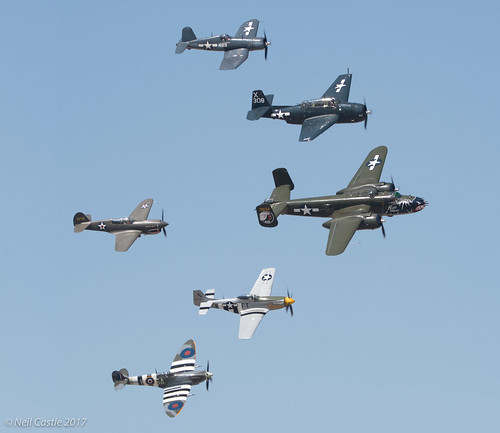 Warren spent a little time in the build up to Reno getting used to the Spitfire in a low level course environment with a home made racecourse surrounding his home base. This provided extra experience in operating the Spitfire in this environment. Another challenge that the Spitfire has over some of the other race entrants is the issue of overheating. Anyone who has seen the Battle of Britain film will know just how quickly a Spitfire will overheat and how soon the point of take off or shut down can come about. To combat this the Spitfire (and P-40) were fitted with water spraying bars over the radiators which served to keep the overheating issues at bay. 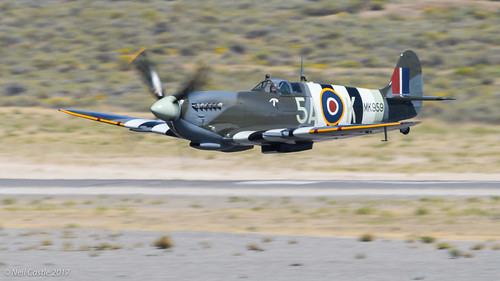 I asked Warren if he learned anything new about the Spitfire while racing at Reno, a one word response followed; “slow!!”. The Spitfire was easily outrun by the Mustang and Corsair and typically averaged around 280mph along with the P-40. Warren confirmed that they all briefed to look after the engines of these historic fighters but also noted that they were very much racing, with the P-40 and Spitfire being close runners throughout the heats. Despite the disappointment in performance Warren quite rightly confirmed that the Spitfire “looked great doing it” and the crowd really enjoyed seeing a Spitfire at Reno. With a typical height of 50 feet as the fighters were put through their paces, it certainly sounds like an impressive spectacle. 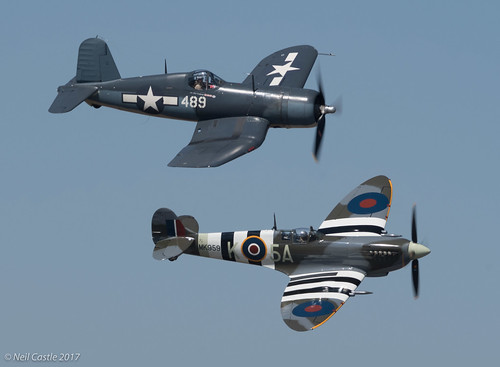 Anyone who has seen footage of the Texas Flying Legends display routine will know that low level flying is nothing new to this group of pilots and Warren especially. A display routine in the Spitfire is typically flown with +4lb of boost at 2,650rpm which is ample to reach the required 260mph for a loop for example. Having owned a number of vintage aircraft over the years Warren says he has learnt to look after engines and not to push them too hard. Comparing the Spitfire as a display aircraft with others in the fleet Warren confirmed that it is a really nice handling aircraft. The aircraft is lighter on the controls than the Mustang but comes nowhere near to the nimble performance of the Zero. As an aside, Warren confirmed that in the Zero a looping figure can easily be flown with a run in speed of 160mph and can often enter straight into aerobatics off the deck, confirming just how impressive a machine the Japanese fighter was when it arrived on the scene. 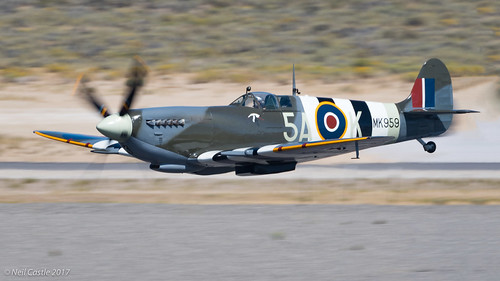 Having listened and discussed the various aspects of operating a Spitfire across the United States from display flying to air racing, I closed our conversation by asking Warren to sum the Spitfire up in a few short words. His reply was a simple and perfect summary:

“Historic, Beautiful, Iconic and the Pride of a Nation”

Texas Flying Legends Museum seek to help spread the word of the heroic work of wartime aircrews and engage both old and younger generations alike in those stories. Their impressive fleet of aircraft is expanding on a regular basis (Warren had not long finished the flight testing process on the Museum’s latest aircraft, P-51C Lope’s Hope III, when we spoke.) I would encourage anyone reading this post to take a look at the fantastic work the Museum carry out and the incredible flying displays they put on. I’d like to thank Warren for his time in helping put this post together.

Thanks also go to Neil Castle and Scott Slocum for the images in this post.