At home in the Milestones hangar at Hendon is B.35 TJ138, the aircraft is displayed in a unique tail up position and wears 98 squadron markings. The aircraft was built at Hatfield and delivered as part of a batch of aircraft between July and November 1945. The aircraft flew with 98 Squadron in West Germany until 1950 when it returned to the UK and was placed into storage.

In July 1953 the aircraft was moved to Sywell where it was converted into TT.35 standard before moving to Llambeder in March 1954. It served as a target towing aircraft until 1959 when it was put up for disposal. 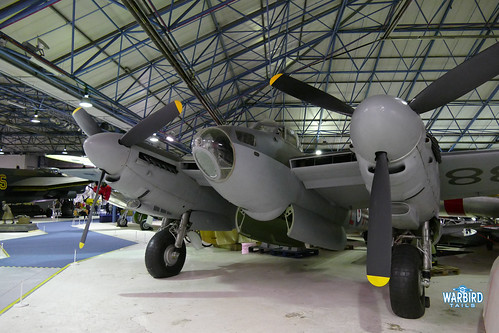 It moved around the country being put on display at various museums and bases before finally ending up in the Bomber Hall at Hendon in 1992. When the Milestones Hall was opened in 2003 the Mosquito was placed on display in a tail-up stance mounted on a special plinth. This offered a unique view at the classic bomber and was its home for well over 10 years. 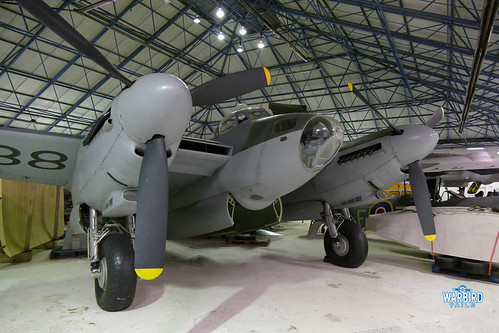 As part of ongoing redevelopment work at the Hendon site, the Mosquito has now been removed from the Milestones building and returned to its original display location in the Bomber Hall. While the previous display was certainly unique it makes a welcome change to see this airframe returned to ground level and back at a 3 point attitude. The Mosquito certainly looks at home in amongst other contemporary bombers.