20 Days on from the final airshow of the season, the normal expectations would be that most of the display aircraft would be locked away in hangars for the winter.

It was a pleasant surprise, therefore when I read that the Gnat display team would be hosting an open day at their North Weald base. Even better they planned to do some flying.

The event was split, as I found out too late, between the teams hangar and the Squadron café on the other side of the airfield. At least for future events I will know to head over to the Squadron as well.

Arriving at North Weald shortly after 11 we drove round to the hangar, where the red Gnat was sitting outside with a Ground Power Unit connected.

Once out of the car it became apparent they were starting the Gnat up, perfect timing! (Though this also tied in with me finding out I left the camera memory card at home, so apologies for the phone shots!) Following a short engine run the Red aircraft was towed back into the hangar for some last minute maintenance. 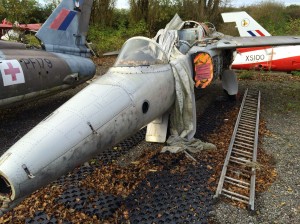 One of the spares aircrafts out the back of the hangar.

Upon entering the hangar the first thing that catches your eye, besides the Vietnam era Huey helicopter, Is the impressive sight of the teams Gnat F.1 restoration project, currently in a dismantled state giving impressive access to details.

Inside the Gnat F1.

The machine currently wears a striking Indian Air Force scheme complete with polished metal on the nose. The F1, with its slightly different nose profile, will provide a great contrast when it is up and flying with the team as a four ship. It is my understanding that work has begun and will progress depending on donations and other commitments.

Speaking of donations, the event itself was technically free, with donations encouraged to the display teams charity, Heritage aviation, which I hope provided a great boost in funds for the team.

Shortly after our first look around the hangar we were treated to a couple of passes from the red and white Gnat, complete with smoke, returning from a local flight. This aircraft then taxied back in to join the Yellow aircraft out on the middle of the airfield.

Word around the airfield was that the team would be going up for a short display around 3 o’clock, so we spent some time looking around the rest of the airfield.

The three Gnats waiting to display.

Around lunch time the red Gnat had another engine run, which was then taxied back round to join its Stablemates. Then it was a case of waiting until around 3 o’clock, when all three Gnats fired up, joined by a Strikemaster camera ship. The Strikemaster got airborne first and flew low down the runway as the three Gnats got airborne complete with smoke systems.

The four aircraft then left the visual circuit for a short while, before returning for a couple of formation passes followed by a formation break. Which saw the yellow gnat rolling out away from the airfield for a short local flight.

What followed was undoubtedly the highlight of the day, the other two Gnats spaced themselves out in the circuit, with the Strikemaster following the second aircraft.

The red Gnat led this pair with a pass down the runway at what would usually be considered low level, however in behind I could see the Strikemaster down low, but I was convinced the Red and White Gnat was below it, sure enough appearing from behind the trees and buildings came the little jet speeding along at what can only have been around 10 feet.

Spectators look on as the Gnat team flies past.

Everyone around let out gasps and laughs of disbelief at this impressive flying. Even more so when the aircraft came round and repeated the performance.

Following these passes the two red Gnats landed, followed by a run and break to land from the Yellow jet. The aircraft positioned themselves out in front of the Squadron building to allow the public to get close up to the team. 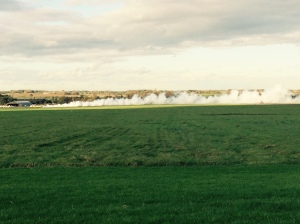 Yellow Gnat providing some smoking entertainment at the end of the day.

Sadly we had to leave at this point, as traffic getting back into Kent was looking awful. I would have loved to have spent some time looking up close at these wonderful machines, perhaps next time.

All in all for a debut event I thought it was very well done, my only criticism, if any is that perhaps closer access could have been given to all three jets prior to them going flying.

However this event certainly stands up there with the great North Weald Open days of recent years. Here’s to the next one.

For more information on the Gnat Display Team, check out their website: