A belated start to 2021 posts, apologies all!

With the new year well underway and some hope on the horizon for a little normality by summer, I thought it was time to start 2021 off. Living in Kent it’s been some form of lockdown now since early November so outings have been few and far between (though I did have the pleasure of spotting Peter Teichman’s new Spitfire over home a few weeks back which was a delight!). I thought i’d take a look back through the archives and pick out a few movie/temporary schemes from airshows over the last few years. It’s always great to see old favourites take on new looks, even if it’s only for a little while.

Back in 2016 the summer airshow season co-incided with the aerial filming of Christopher Nolan’s Dunkirk film. This saw a number of UK based warbirds take part in extensive sorties both on the south coast of the UK and over in France and the Netherlands. 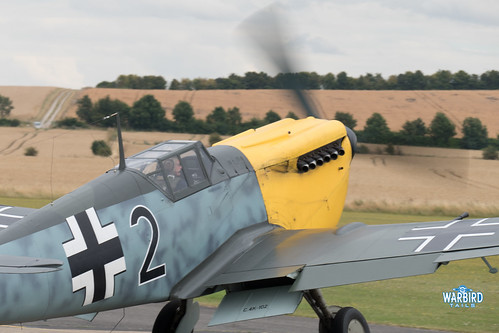 The original plan for the 109 role in the film was to be Planes of Fame’s Hispano Buchon, which was coming to the end of an extensive restoration in the early stages of 2016. Sadly engine troubles prevented that airframe getting back into the air. Soon enough however the Aircraft Restoration Company’s Buchon (normally seen as “Yellow 10” was painted into the same scheme as the Chino based example and joined the three Comanche Fighters owned Spitfires (two Mk Is and a V) on fiming duties. 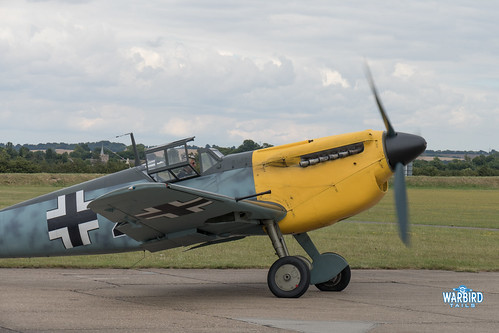 It had been some years since we had seen a Buchon in this type of scheme, with a full yellow engine cowling. Making it’s debut at the American Air Show at Duxford at the end of May it really made a great change. The Buchon flew for much of the 2016 season in those colours before reprising the scheme for it’s second visit to Warbirds Over Wanaka in New Zealand over Easter 2018.

This example of the Spanish built fighter is no stranger to unique schemes, with a wonderful weathered dessert scheme being applied for the 2017 Flying Legends show as well. The classic Yellow 10 scheme would eventually return in 2018, when the Buchon population increased rapidly with a wonderful array of rebuilds coming from Air Leasing at Sywell.

Flying alongside the Buchon in the filming of Dunkirk were three US owned Spitfires. Two MK Is (Duxford based AR213 and X4650) were joined by newly restored Mk V EP122 (typically resplendent in a Mediterranean camouflage from its time serving on Malta).

For the film all three aircraft were painted into early war camouflage with black and white undersides. The Mk V had it’s cannons removed, creating a Mk I like appearance due to the early DH style spinner. With Flying Legends 2016 co-inciding with the main stretch of filming activities, only the Buchon and EP122 returned to Duxford.

At the time it was a real shame that the unique EP122 was to make its debut airshow appearance with clipped canons and in movie paint. Looking back though it was great to get a chance to see one of the films stars in those colours during filming. EP122 would eventually make a public appearance in it’s stock configuration at the “Meet the Fighters” show at Duxford in September.

Having long been returned back to stock colours, AR213 and X4650 were repainted back into their movie guises (AR213 only so far as the black/white undersides) for a wonderful pairs routine as part of Flying Legends 2017 (to coincide with the upcoming release of the film). With P-51B Berlin Express being unable to take part as the Joker at that years show, X4650 was flown by Nick Grey to close the show on the Sunday in a memorable routine in those colours.